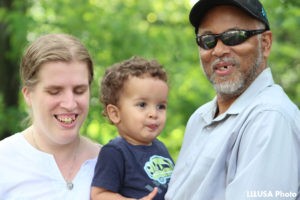 Birth was over. I held my son on the hard bed in Labor and Delivery, buoyed by very soft pillows that offered as much support as a rapidly deflating balloon. Someone—maybe a nurse or maybe one of my family members—helped me position the baby to nurse, that first, most pivotal spiritual bonding experience which would prove to the skeptical nurses that I was a perfect mother despite my blindness.

And oh, the pain! Labor, for the most part, except maybe during “transition”, was a dull pain. Without having taken a class and having just read extensively, I could breathe through most of it. And for all of the drama, labor had an end. I realized breastfeeding would not end, perhaps for years.  That first suckling of my baby felt like a thousand tiny needles attaching to my nipple and pulling there. And Langston did not even have teeth! None of my breastfeeding supportive friends and none of the literature I had read cared to fill me in on this small but crucial detail. Later, I found out from my reading that I was most likely not latching correctly.

When Langston was three days old, he was diagnosed with jaundice and reentered the hospital after we were both released. The doctors and nurses told me he needed to be bottle-fed until he was stabilized. I was able to flag down a lactation consultant who told me I could pump every three hours, save the milk to give to Langston, and could breastfeed him again in just a couple days when his bilirubin count was back to normal. I worried about nipple confusion and felt mortified that I couldn’t quite pump enough milk for those days of extra hydration, so some formula was also necessary.

I felt a longing for my pump when Langston nursed again and the needles returned. The pump had saved my nursing relationship, but it also didn’t hurt as much.  Rebecca Walker wrote in her book Baby Love that when her son went into the neonatal intensive care unit (NICU) and she had to pump, she wanted to put a bumper sticker on the pump that said, “I’d rather be nursing.” So I was ashamed that, instead, I wanted to put a sign on Langston that said, “I’d rather be pumping.” Langston’s suction, unlike that of the pump, didn’t appear to be adjustable.

I don’t mean to suggest that I was without support. All of the doctors and nurses I encountered, whether they could help with latching or not, were very supportive of my breastfeeding decision, and I think breastfeeding really gave me some credibility for them as a viable mother. One lactation consultant spent about an hour with me in the NICU as I nursed Langston in a big wooden rocker, making sure that Langston had a full and satisfying meal and that I had a relaxing one. My friends, my sister, but mostly my mother, woke around the clock with me during those early days with Langston to help with positioning, to keep his flailing hands away from my nipple.

When they left, my husband took over as co-night waker, changing Langston’s diaper for me so I could get comfortable. I had friends with babies with whom I could share the trials and tribulations of breastfeeding as they arose, and somehow, even though we had never really talked much before (or in some cases, ever), we were suddenly bonded by this experience. 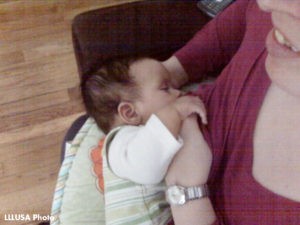 Langston was slow to gain weight at first, and at his one-month visit, his pediatrician asked for an extra weight check in two weeks. I nursed feverishly, got a cold, and had to keep nursing and almost cried, because I was sure that no milk was coming out, even though my husband kept reassuring me, “He’s getting bigger. I can tell.” When I took Langston back to the doctor, he had gained twice as much weight as he needed to in order to satisfy the doctor.

Beyond human support, I owned more breastfeeding accessories than I could ever use. I had a pillow to support Langston and me while I nursed, which I used at every feeding. I had the old maple-colored wooden rocker with new blue and white cushions in which my mother had fed us all, whether she used breast or bottle. Breastfeeding felt all consuming in those early months. I was either preparing myself for feeding, feeding, getting Langston back to sleep, or gulping food and water before the next feeding. I felt like I was constantly preparing for a marathon in which I wasn’t running anywhere.

One day, after my husband had returned to work and I was alone in the apartment with Langston, I breastfed him for a half hour or so in the rocker, and when I released him, he started to cry. “He must be tired,” I thought, “and I’ll be damned if I’m going to feed him anymore. I’ve been feeding him all day. I need a break!” So I did everything I could think of. We paced the apartment, I gave him a pacifier, I rocked him in the rocker, I sang him songs, I shushed him, I burped him some more, all to no avail. He continued to cry, and I was sure it was colic. How could such a tiny human being be so loud?

Finally, desperately, I juggled the pillow beneath him and reinserted the breast.  He sucked for a long while, then pulled off and made the same breathy noise someone older makes after taking a long, refreshing drink, “Ah!” Then he fell asleep. Thus, I learned how little I sometimes know about my body. There was always more milk. It helped me to feel closer to him and to trust that my body was doing the best it could for him.

I always looked forward to the end of the day when my husband and I would leave work, take a train to a bus to pick up Langston at daycare, and walk home. If he hadn’t fallen asleep in the stroller, he would yell “mama” as soon as we were inside; if he had fallen asleep, he would yell for me as soon as he’d awaken. I’d strip the second the door closed, my purse, jacket, and shirt falling in a puddle around us on the floor, and his father would hand him to me so he could have a drink. I could feel myself relaxing, the seemingly constant layoffs at work becoming more hazy in my brain, and I could sense that even though Langston loved his little school, he was relaxing, too. The teachers at his daycare told us he was always happy unless he was hungry or tired, and I wondered if somehow breastfeeding gave him that gateway back into the multiplicity of feelings he could express with his parents.

It was now Thanksgiving weekend, less than a week before Langston’s first birthday. We were spending Thanksgiving at my mother’s house and Langston wasn’t eating like usual. Langston woke unusually often our second night there, screaming and crying loudly. I knew Langston was teething and couldn’t even begin to fathom the pain. Instead of nursing, he let one tooth graze my nipple, then cried and arched his back to escape. I berated myself for not having brought the pillow to give him more support, and, hours later, when he still wouldn’t nurse, I berated myself more for not having brought my pump.

“Mom, he won’t nurse,” I complained to her the next morning over the single cup of coffee I allowed myself. That day, I could have used several.

“Well,” Mom said, “maybe a warm shower will help relieve some of the pressure.”

The shower didn’t help much. But finally Langston was hungry enough that he nursed a couple more times before going on strike again. By then I was home and had my pump. During my free time, I read and read and read about nursing strikes. Some of them lasted; others didn’t. The more I read, the lonelier I felt.  None of those women were me, and none of those babies were Langston. The women could prepare me, but no one could prepare Langston, least of all me.

On Monday morning, the pediatrician unearthed the cause of the strike — a mild ear infection — and antibiotics subsequently rooted out the discomfort.  Langston nursed again, as if the whole thing never happened. I was grateful for the resiliency of the infant and toddler brain, its ability to forget setbacks and to keep on going. Suddenly, my gratitude overshadowed those inconveniences that now felt trivial. I knew that nursing into toddlerhood was right for both of us, even when others would question it. 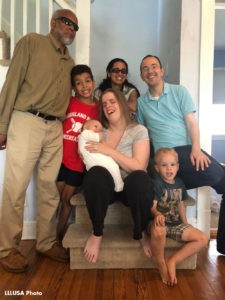 Langston weaned nearly two years later, when he was almost three. Since then I nursed his younger brother, Noor, for over two years and am now nursing their six-month-old sister, Karuna. My mother learned more about nursing toddlers and has been supportive since her one skeptical moment; I’ve learned that the breastfeeding expectations were much different when I was growing up. Each nursing journey has been unique; in some ways, I’ve learned a lot since my nervous first time, and in others, I feel like I’ve learned nothing at all. Nevertheless I have enjoyed the unique opportunity nursing has given me to connect deeply with each of my children. I’m also profoundly grateful for the in-depth support and encouragement I’ve received from Yosefa, our local LLL Leader, to family and friends who have shared the breastfeeding journey with me, and to LLL’s online resources for their invaluable wisdom.

Editor’s Note: While the author wrote this article several years ago, the breastfeeding challenges she faced are still experienced by nursing parents today. There is a wealth of information on the La Leche League International website concerning topics touched on in this blog post:
It may also be helpful to speak with a La Leche League Leader by telephone, online, or at a Series Meeting. Find a nearby Leader at lllusa.org/locator/.

Please send your story ideas to Amy at nbeditor@lllusa.org.

← Then and Now: Laurie and Derek’s Story
Looking Back: Solutions to Biting →