Looking Back: It’s Kind of Magical 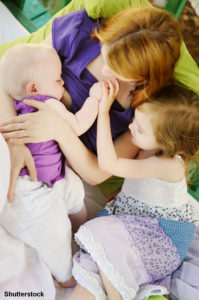 In December I gave birth to our long awaited son, James David. He is our second child but the first to be breastfed. Having to go back to work soon after the birth of our first child, Amanda, I had no idea what I had decided to give up when I decided to bottle feed her. With the birth of J.D., I was glad that I had gone to LLL meetings to prepare myself for a pleasant nursing experience. Having read everything I could get my hands on before this second baby came, I am still amazed at how we as women, by breastfeeding alone, can sustain our helpless babies and help them grow into strong, well-nourished children.

One day a friend asked me to watch her two children—four-and-a-half-year-old Ian and seven-month-old Lindsey. We were all playing in the nursery when my son J.D. decided it was time to eat. I stayed there in the nursery and fed him as usual. All at once my friend’s son noticed what I was doing. 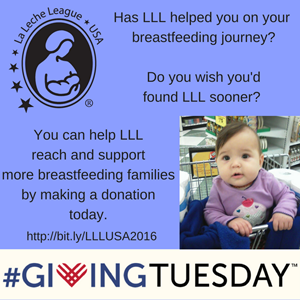 “What’s that in his mouth?” Ian asked.

“I am feeding him,” I replied.

“No! What’s that in his mouth?” he asked again.

At the second question, I suddenly realized that he probably had never seen a mother breastfeeding her child since both he and his sister had been adopted. “That’s my breast in his mouth. He sucks on it to get milk out of it just like Lindsey sucks on her bottle,” I explained.

Ian walked up closer to get a better look and with those questioning eyes asked, “But how does he know when the milk is all gone?”

Realizing he was confused at the fact that you can’t see through a breast like you can with a bottle, I only hoped I could answer his question to his satisfaction.

“Well, if he doesn’t drink all the milk sometimes he falls asleep or if it’s all gone he just lets go of it. If he still wants more, then he will suck on the other breast.”

“You mean he just knows when to let go?”

“Gosh!” he said as he whirled around in a circle. “That’s kind of magical.”

Smiling, I looked down at my enthusiastic and plump son nursing his way to contentment and said, “Yes, it really is magical.”