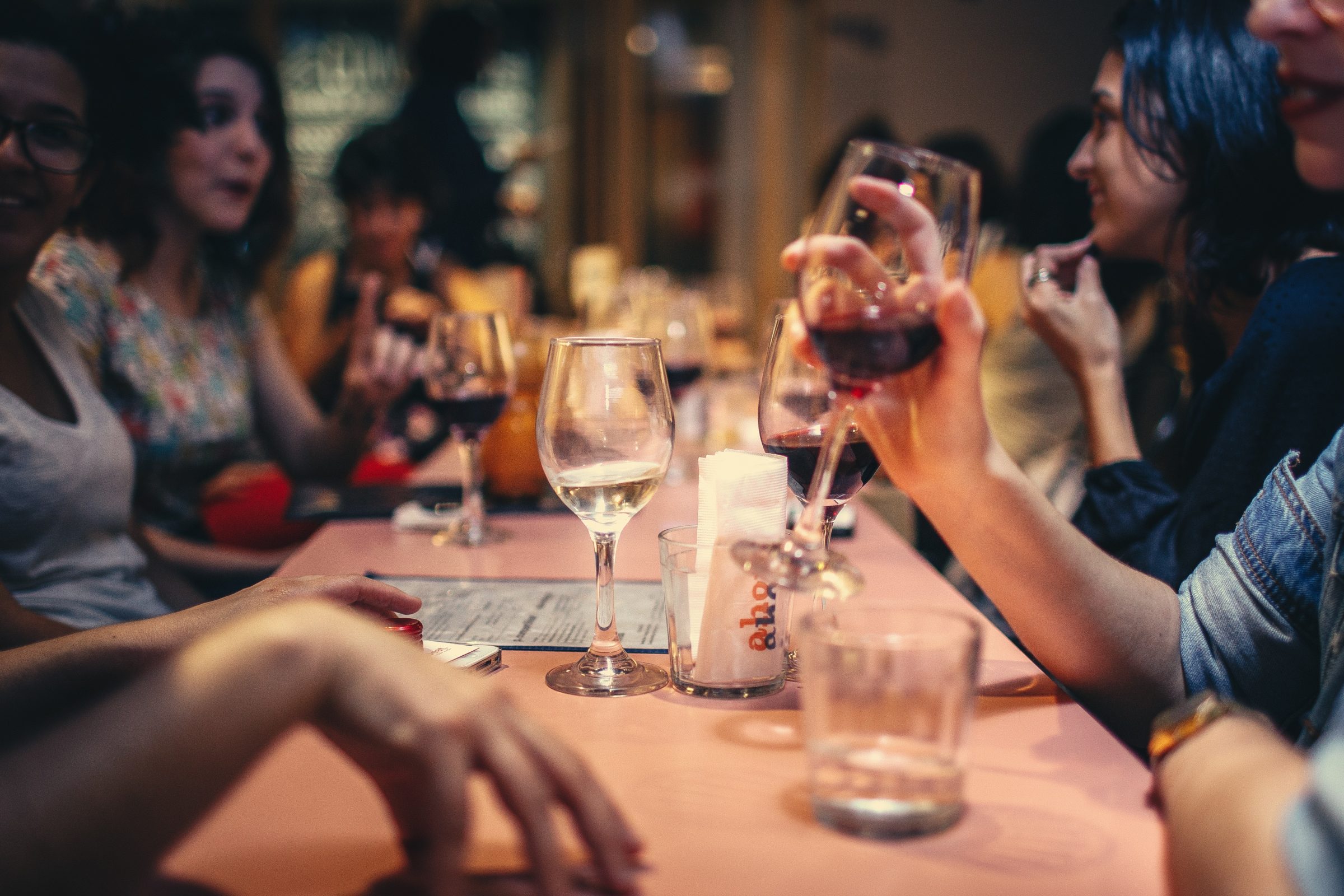 Many parents find themselves in a situation where they may want to drink. Maybe you are going to an event where wine will be served, or out with friends, or on a date. You may have concerns about drinking and any possible effects on your baby.

Breastfeeding families often receive conflicting advice about whether alcohol consumption can have an effect on their baby. While people are frequently warned not to consume alcohol during pregnancy due to evidence that it could cause damage to an unborn child, the risks of consuming alcohol while breastfeeding are not as well-defined. When someone drinks occasionally or limits their consumption to one drink or less per day, the amount of alcohol baby receives has not been proven to be harmful.

If consumed in large amounts, alcohol can cause drowsiness, deep sleep, weakness, and abnormal weight gain in the infant. There is also greater possibility of decreased milk-ejection reflex (let down) in the nursing parent. Those who have been drinking should not bed-share with their babies as their natural reflexes will be affected.

Will you be eating?

DO I HAVE TO PUMP AND DUMP AFTER DRINKING AN ALCOHOLIC BEVERAGE?

As alcohol leaves your bloodstream, it leaves your breastmilk. Alcohol is not “trapped” in breastmilk. It returns to the bloodstream as the nursing parent’s blood alcohol level declines, so pumping and dumping will not remove it. Pumping and dumping, drinking a lot of water, resting, or drinking coffee will not speed up the rate of the elimination of alcohol from your body. The old recommendation to “pump and dump” is not considered evidence-based.

If you will be away from your baby and need to pump or express milk to relieve engorgement, the expressed milk will continue to have alcohol in it.

HOW MUCH ALCOHOL IS IN MY MILK?

Alcohol is present in your milk at roughly the same level as in your blood: it rises and falls along with it.  If you know your blood alcohol level, you know your milk alcohol level.  Alcohol passes freely into milk and has been found to peak about 30 to 60 minutes after consumption, 60 to 90 minutes when drunk with food. But what does that mean? This does not mean that your milk has as much alcohol as an alcoholic beverage. It does mean that your breastmilk has as much alcohol as your blood after an alcoholic beverage. For instance, a Blood Alcohol Content (BAC) of 0.10 (0.10% or one tenth of one percent) means that there is 0.10% alcohol content in your milk. You can compare that to the typical glass of wine which is 11-13% alcohol content or liquor which is 28-60% alcohol content.

WHAT IF I GET DRUNK?

Drinking to the point of intoxication, or binge drinking, by breastfeeding parents has not been adequately studied. Since all of the risks are not understood, drinking to the point of intoxication is not advised. Intoxication affects your ability to care for your baby safely which should also be considered. Those who have been drinking should not bed-share with their babies as their natural reflexes will be affected.

CAN DRINKING AN ALCOHOLIC BEVERAGE HELP ME RELAX AND STIMULATE MILK PRODUCTION?

Alcohol consumption has not been shown to stimulate milk production. Studies have found that babies nurse more frequently, but consume less milk in the 3-4 hours after an alcoholic beverage is consumed (Mennella 2001). While there are ingredients in some beers which are traditionally seen to have milk-increasing properties, modern alcoholic beverages have not been shown to increase supply.

Yes, alcohol abuse (excessive drinking) by the nursing parent can result in slow weight gain or failure to thrive in the baby. The let-down of a person who abuses alcohol may be affected by their alcohol consumption, and they may not nurse often enough. The baby may sleep excessively or may not suck effectively leading to decreased milk intake. The baby may even suffer from delayed motor development.

WEIGHING THE RISKS AND BENEFITS

It is a good idea to weigh the benefits of breastfeeding against the benefits and possible risks of consuming alcohol. You might find the following suggestions helpful.

Thomas W. Hale, R.Ph. Ph.D, a registered pharmacist, says this in his book Medications and Mothers’ Milk (17th ed.): “Alcohol transfers into human milk readily… This does not necessarily mean the dose of alcohol in milk is high, only that the levels in plasma correspond closely with those in milk. The absolute amount (dose) of alcohol transferred into milk is generally low and is a function of the maternal level. Significant amounts of alcohol are secreted into breastmilk although it is not considered harmful to the infant if the amount and duration are limited. The absolute amount of alcohol transferred into milk is generally low. Excess levels may lead to drowsiness, deep sleep, weakness, and decreased linear growth in the infant. Reduction of letdown is apparently dose-dependent and requires alcohol consumption of 1.5 to 1.9 gm/kg body weight (study). Other studies have suggested psychomotor delay in infants of moderate drinkers (2+ drinks daily). Avoid breastfeeding during and for 2 – 3 hours after drinking alcohol. Heavy drinkers should wait longer. In an interesting study of the effect of alcohol on milk ingestion by infants, the rate of milk consumption by infants during the 4 hours immediately after exposure to alcohol (0.3 g/kg) in 12 mothers was significantly less (study). Compensatory increases in intake were then observed during the 8 – 16 hours after exposure when mothers refrained from drinking. Adult metabolism of alcohol  is approximately 1 ounce in 3 hours, so mothers who ingest alcohol in moderate amounts can generally return to breastfeeding as soon as they feel neurologically normal. Chronic or heavy consumers of alcohol should not breastfeed.”

Dr. Jack Newman MD, FRCPC and Thomas W. Hale, R.Ph. Ph.D both believe that a nursing parent can drink some alcohol and continue breastfeeding without interruption. Newman says this in his handout “More Breastfeeding Myths”: “Reasonable alcohol intake should not be discouraged at all. As is the case with most drugs, very little alcohol comes out in the milk. The mother can take some alcohol and continue breastfeeding as she normally does. Prohibiting alcohol is another way we make life unnecessarily restrictive for nursing mothers.”

The American Academy of Pediatrics (AAP) states, “If you are going to have an alcohol containing beverage, it is best to do so just after you nurse or pump milk rather than before. Breastfeeding or pumping breast milk is ok 4 hours after your last drink. That way, your body will have as much time as possible to rid itself of the alcohol before the next feeding and less will reach your infant.” It should be noted that going off of weight/body mass is a more consistent measure of how long it takes for an alcoholic beverage to clear your system than a set number of hours.

Alcohol, LactMed by the National Institute of Health

Drinking Alcohol While Breastfeeding including table showing how long to wait until alcohol clears your system, Canadian Family Physician Journal

Beer as a Galactagogue: A Brief History, Hilary Jacobson CHT

IS YOUR CONCERN OR QUESTION NOT COVERED HERE?

Please contact a local LLL Leader with your specific questions.