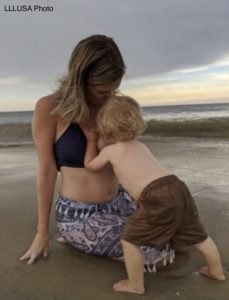 My son is neurodivergent and had a rough start to life and breastfeeding, but with dedication, perseverance, and support he just self-weaned in August at a little over 3.5 years old.

Our journey really started with his traumatic birth. He was supposedly growth restricted (intrauterine growth restriction or IUGR) and breech at 35 weeks. The obstetrician wasn’t trained in breech birth and attempted an external cephalic version (ECV). During this attempt, my son’s umbilical cord tore and he went into fetal cardiac arrest.

Within two minutes we were wheeled to the operating room, put under general anesthesia, and he was born by cesarean and fully resuscitated. I finally held him for a brief period two hours after he was born. Other than a couple of drops of colostrum rubbed onto his gums, he didn’t eat anything for the first 24 hours. We were working with the lactation consultant when his oxygen levels began dropping and he was resuscitated again.

In the Neonatal Intensive Care Unit (NICU), he was fed through a feeding tube with a combination of my milk and donor milk. I exclusively pumped around the clock and only left the NICU for shift change. The medical staff kept pushing to use formula, and I kept refusing.

At one week old, he was off oxygen and pace feeding with a bottle, and we were able to go home. I tried everything to get him to latch but never could get his mouth open enough. I met with five different International Board Certified Lactation Consultants (IBCLCs) who kept saying to just be patient since he was born premature. One of the lactation consultants was able to get him to latch shallowly for a brief time.I also met with a postpartum doula who was a Certified Lactation Counselor (CLC). In the end, my son was found to have a tongue-tie, lip-tie, buccal ties, recessed chin, locked jaw, and high palate.

We had the ties revised and started chiropractic care, cranialsacral therapy, and feeding therapy with a speech therapist. He finally latched at three months old! Over the next two months, I slowly transitioned from exclusively pumping to exclusively breastfeeding.

During those first five months, I had recurring mastitis seven times due to the wrong flange size, incomplete emptying of my breasts, and a rundown immune system.

Our journey was smooth sailing from there on out. We even tandem fed with his younger brother for the last 10 months.

We started noticing around 18 months that my son was severely speech delayed, but we kind of blamed it on the pandemic. Around 2.5 years, we started noticing his hypersensitivity to things, long three-hour tantrums, and his advanced academic skills (he started reading on his own at three years old).

A month before my son self-weaned, he was diagnosed as autistic. Reflecting back, I don’t know how I would have mothered without breastfeeding. Breastfeeding was the only thing that calmed him during a tantrum. It was the only thing that made him feel safe and secure when he was overwhelmed. It fixed all his boo boos. It filled in all his nutritional gaps with his picky eating. When his brother was born, he knew he still had special time with me. He breastfed while I was in labor and stayed by my side for the whole home birth of his brother. In public, when there were too many people around or it was too loud, we’d just sit in the middle of the floor wherever we were and he’d get “boobie.” It got him to sleep every night. He has never been sick.

La Leche League was my emotional support, especially in the beginning! They were my source for all evidence-based information! At first, I drove about an hour away to a La Leche League Group that the hospital had recommended, and then when my son was around six months old, I found a Group closer to me. They were so welcoming and made sure everyone there felt like they belonged. When my son was around two years old, the three Leaders in the area were all retiring, so I went through the training and became a Leader. I couldn’t let this resource disappear from our community because there just isn’t enough support in general.

← The Breast Crawl: From The New Beginnings Archives
The Curious Taste of Human Milk →