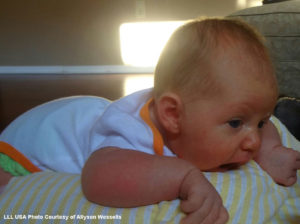 I became a physical therapist in 1999, a mother in 2007, and a La Leche League Leader in 2009. The parallels of these are interesting and revealing as I reflect back on them. As a physical therapist, I learned extensively about how human development unfolds, at least from a textbook perspective: head control followed by trunk control in concert with rolling, sitting, crawling—each reflex giving way to the next and all leading to those amazing first steps.

When I became a mother, I was excited to celebrate these motor milestones. Tummy time was happening from the start. I avoided all the myriad equipment available for babies – from saucers to walkers – that can interfere with developing hip strength, information that I remembered learning in school. I also breastfed. Breastfeeding is a fascinating part of our biology and development yet something that I think was missing in the coursework to become a physical therapist, let alone in earlier basic health classes. 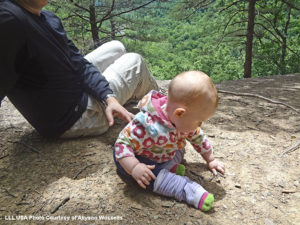 As I began to attend La Leche League meetings and later became a Leader, it occurred to me that anticipated milestones were also enhanced by what was happening with each nursing session. Head control, trunk control, and later on even word formation can be traced back to the rhythmic jaw and neck strengthening of the very first breastfeeding.

It is no wonder to me now that breastfeeding has been shown to facilitate motor development. And, in turn, motor development must enhance stamina for breastfeeding. Babies are born with amazing directive head control that progresses with each feeding when their bodies are stabilized on us with reclined assist from gravity. Laid back breastfeeding! Switching from side to side helps keep neck muscles symmetrical, potentially minimizing positional torticollis (muscles in neck become stiff or tight and cause baby’s head to tilt to one side) and any associated delays. Alternately, fostering motor development through tummy time seems to replicate what happens at the breast. A newborn baby will start to lift and look when placed gently on their stomach on a flat surface. The head tilt, jaw gaping, and tongue extension that reflexively happens is so similar to what happens just before a latch! 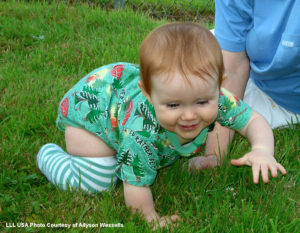 Head and neck strength along with jaw strength builds with each feeding as baby works toward the upright head control that precipitates trunk control, which accelerates into rolling, crawling, toddling, and finally walking. The stronger the jaw, head, and neck become, the more efficiently milk is removed. Muscles prepare to form sounds and words as breastfeeding becomes easier and more automatic for both mother and baby.

As I reflect on the many La Leche League meetings I have attended, it is amazing to contemplate the development I have seen over months and years! If babies aren’t breastfeeding or being held at a meeting, they are typically happily lying on the floor with other babies, often on their stomachs in those first couple of months, then sitting, crawling, and cruising around by the end of the first year. Meetings are abuzz with motor development swaying while breastfeeding to babywearing to tummy time on the floor and back to breastfeeding where it all began! It’s such a wonderful rhythm of development. I am grateful for La Leche League meetings as they connect so much together for me as a mother, a physical therapist, a Leader, and someone who just marvels at our biology.

← Diary of an Expectant Mother
Looking Back: The Time of Our Lives →