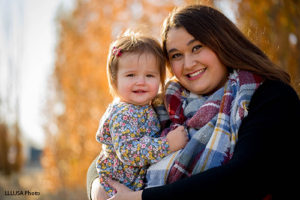 Breastfeeding through divorce has been both a challenge and a saving grace. I did not anticipate ever getting a divorce, so imagine my shock when my now ex-husband came home from work in early February 2019 and handed me divorce papers.

Our daughter was only seven months old at the time, and exclusively breastfed. We had just started introducing her to solids, the entire time saying, “Food before one is just for fun.” I never imagined that my now ex-husband believed that our daughter was fully capable of surviving without me. I still cannot fathom it. I grew this baby, carried her for nine excruciating months, experienced a cesarean birth, endured a broken tailbone, and overcame the early challenges of breastfeeding, only to now have this tiny baby taken from me.

There were no sympathetic lawyers or courts; judges did not declare that because my tiny baby was a breastfed baby that she would remain with the mother. I was told that I could either pump milk or the baby could have formula. On the day my daughter turned eight months old, I was court mandated to allow her father to take her for 24 hours. It was the worst 24 hours of my life; however, I persevered.

I pumped as much and as often as I could, but the stress of everything weighed on me and affected my supply. I reached out to LLL USA on Facebook and found their information very helpful. l I reached out to a lactation consultant, and she recommended taking Goat’s Rue. I added Brewer’s Yeast to my morning smoothies. I asked my younger sister and family friend to donate their milk as I tried to build up a freezer stash, which they both did wholeheartedly. I increased my appointment frequency with my therapist, and I spoke to my doctor about anti-anxiety medication that was safe to take while nursing. I replaced my pump parts every two months to make sure I had no output issues with the machine. While I felt like my life was out of my control, I spent my energy focusing on what I could do: maintain my supply and pump for my daughter.

I grew to resent pumping because I did it so frequently. My ex-husband had our daughter every Wednesday for 12 hours overnight, and every other weekend for 24 hours until she turned one. At that point, my daughter started spending every other weekend from Friday evenings to Monday evenings with her father, which meant even more pumping time. The long absences were hard on both of us, but breastfeeding proved to be our way of reconnecting after our time away from one another. I remember the first time I got her back and we took a bath together. She lay in my arms and nursed while we practiced skin-to-skin. It became a habit to always nurse at each reunion; in fact, my daughter was, and still is, the one to initiate nursing sessions immediately when she sees me again. The bond we share while nursing was what got us through the early stages of the divorce, and it still helps us reconnect after long stretches away from one another.

My daughter is now 21 months old and still nurses frequently. I’m happy to say that we are both doing very well. We moved about five hours away from my ex-husband when I found a full-time teaching position on the other side of the state. While I teach, she goes to an early learning childcare center. Every time I pick her up in the afternoons, she gives me a big hug and then declares she wants “nanas”, which is her word for nursing. We usually have to nurse in the car before she’ll allow me to make the 15-minute drive home. Once we walk through the door, she starts pulling on her clothes and demanding more nanas. We practice skin-to-skin as we lay on our shared bed and nurse until she’s content as we reconnect.

Divorce was an ugly time, and it was extremely difficult emotionally. However, I would say that because it was just the two of us and that my daughter was still nursing, it tightened the bond between my daughter and me. We have an us-against-the-world attitude and find breastfeeding to be the constant we can rely on. I know that she will not nurse forever, but for now, nursing has been our saving grace during a time of turmoil.

← Staying Close To Home: Entertaining Our Children
Newborn Sleep: How I Learned to Stop Worrying and Love Contact Napping →