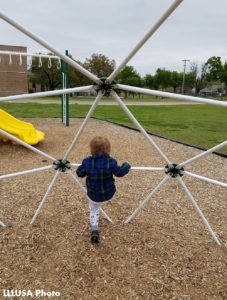 My first child (my son) is a little over two years old, and I’m now breastfeeding my second baby.

My son had an undiagnosed tongue- and lip-tie for two months. I breastfed him for hours on end, day and night. The first two lactation consultants missed the tongue-tie, but the third one informed me of it. The second lactation consultant encouraged me to pump after nursing so that I could supplement with my own breast milk. The pediatrician suggested that as well.

My son was not gaining weight and had started to lose weight, when I met with the second lactation consultant. She then suggested that I supplement with formula after breastfeeding, so that I could pump milk and save it so I could supplement with it later on. My son maybe spent a total of two weeks with formula after nursing, as the pediatrician encouraged me to use the milk I had stashed, instead of formula.

My son had his tongue-tie revised at two months old, but still did not gain weight, even with supplementing after nursing. At four months old, he did not even weigh ten pounds. From two days after he was born up until he was eight months old, I was at the pediatrician’s office for weight checks. He had blood tests done at 8 months old, which showed there was nothing wrong and weight checks stopped. My son started to gain more weight when he was nine months old. 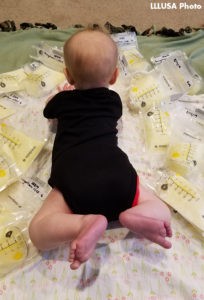 I pumped six to eight times a day until he turned one. I was waking up in the middle of the night to pump until he was six months old but could not function well, so I stopped getting up at 1 a.m. to pump. After my son turned one year, I cut down on pumping to four times a day and stopped when I was six weeks pregnant with my second child as it became painful. He continued to breastfeed until he was 20 months old. I had planned on tandem feeding, but that didn’t happen.

I found La Leche League when I was taking a breastfeeding class at a previous job, a short time after I became pregnant with my first child. I also used the La Leche League groups on Facebook for support. I really love the information on safe sleep.

My husband is an excellent support person and all that I have, as my entire family is 1,400 miles away. Our pediatrician was amazing and focused on all areas of growth, not just weight or percentiles. My cousin’s wife, Danica, also was helpful and supportive with breastfeeding. Although she lives in Pennsylvania, she helped me work through a lot via text message. My mother-in-law was supportive of breastfeeding as well, as she breastfed my husband and his two sisters well into toddlerhood.

My oldest, Ross, is two years old now, and my Annie is four months old. I put in so much effort to breastfeed my first child, and with my second, it was so much easier. I hope that this story will inspire and help other breastfeeding parents.

← Feeding The Family: Pleasing Pasta Salad
Looking Back: Look At Your Baby! →