Looking Back: A Problem Resolved 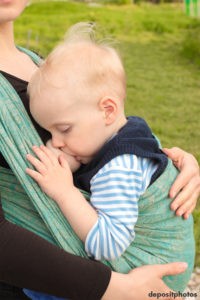 Some of my Kansas City friends and Leaders have urged me to share my nursing story of nursing a baby with a partial cleft of the soft palate. Glen, my second breastfed baby, was born with a small hole, the size of a half-dime, oval in shape, located where the uvula would normally be. My son required no extra-special care; however, when he was held in too reclining a position, the milk ran out his nose. This situation caused him no discomfort, but prevented me from lying down to nurse him. Fatigue was my constant companion.

This past December, when Glen was sixteen months old, we took him for an appointment to schedule the date of surgery. During this interview I happened to mention that Glen was still nursing, and the surgeon indicated that he should be weaned before the operation. Since the operation was not scheduled until April, there appeared to be more than sufficient time for Glen to wean himself; so I did not put forth any arguments.

When Glen continued to nurse two and three times a day well into January, the question of “what if he were not weaned before surgery” kept popping into my mind. Mary White, LLLI mother in charge of medical questions, was consulted by letter as to whether a medical problem might be involved in nursing Glen during the post-operative period. Her reply that at most I might have to interrupt nursing for a few days to prevent tearing out of the sutures was most reassuring. Next, a note plus Mary White’s reply and a copy of the request went to our family doctor, who concurred that there would be no problem. Later, in reply to a letter sent to the hospital inquiring about rooming-in, the surgeon agreed to my nursing as soon after surgery as possible.

Glen took the entire week in the hospital in stride. He was so calm when the technicians drew blood for analysis that they were dumbfounded. In planning for his hospital stay, the fear of what would be his response to awaking in the middle of the night in a strange place with only strangers to comfort him, and the normal concern of a mother for the well-being of her child, prompted me to make arrangements for rooming-in. Glen did awake both before and after surgery, sometimes more than once each night. My presence and the comfort of the nursing position reassured him.

When Glen came from the recovery room, he was crying as if bewildered, frightened, and in pain. There was no time lost in offering him the breast. The head nurse, concerned that I might be rushing the nursing, mentioned that Glen’s swallowing reflexes were not normal and he was also spitting up swallowed blood; this alone could cause him to choke without the addition of more fluids. I assured her that he was at the emptier breast and that he was not actually nursing.

During the first two post-operative weeks, Glen did not really nurse, but did accept the breast. The roof of his mouth, from which the tissue was obtained for the repair, was swollen and tender. He would hold the nipple in his mouth while I rocked him until he fell asleep. At the end of this time he would take the nipple as if to nurse and then act as if it was a waste of time; I just knew my milk was gone! My one consolation was the fact that if the milk had dried up, then Glen must have been close to weaning before his hospitalization.

Then, at bedtime on what would be the sixteenth post-operative day, he indicated that he wanted to nurse. “Okay, go ahead. You’ll find out as I have already that Mommy is out of milk,” I thought, but to my complete amazement he latched on and sucked away. Now, more than a month and a half since the operation, Glen is happily nursing between one and three times a day, and I wonder—occasionally—will he ever stop?

Support La Leche League USA
Your donation will help to sustain La Leche League breastfeeding support. Donations of any amount are gratefully accepted, and for a minimum gift of $25, New Beginnings will publish your special message of congratulations, encouragement, or appreciation. Donate today!