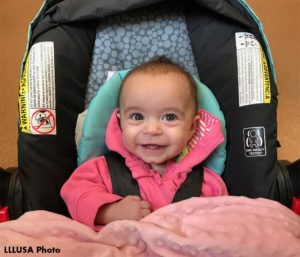 I had hoped to have an all-natural water birth, but that’s not what happened. At 31 ½ weeks, I went to my obstetrician for a routine appointment, and my blood pressure was extremely high. The doctor sent me to the hospital, and I had an emergency cesarean a few hours later. I wasn’t able to see my daughter in the Neonatal Intensive Care Unit (NICU) until the next day. I remember the first time going to see her; I was both excited and scared. As you enter the tiny NICU, all you hear is beeping. We went to my daughter, and I could see her connected to so many tubes, but she was a beautifully formed little human.

The days after you have your baby are supposed to be a joyous time, but when your child is in the NICU those days are mostly filled with worry. My days consisted of going to and from the NICU hoping that I could be with my daughter, talking with her doctors, and waiting for her to get stronger to breastfeed. One day turned into the next, and I felt cut off from the world. The NICU had no windows; I never knew what was happening outside. There weren’t any options for staying the night at the NICU.

I believe in the benefits of breastfeeding, and I really wanted that for my daughter. I started pumping soon after I had my daughter and continued every three hours for the next three months. I found pumping to be challenging, and I had a hard time pumping a lot of milk. I noticed that when I was able to pump right after skin-to-skin contact with my daughter, I pumped so much more milk. I tried to do as much skin-to-skin with my daughter as I could, but some of the doctors and nurses believed it was better for my daughter to rest than to be held by me.

When the time came for my little one to try latching, I thought it would work, but she was still very small and did not have the strength to suck much.  Many of the NICU nurses were very supportive in encouraging me to keep at it. One nurse in particular always said, “Don’t give up. Your baby will get it.” And whenever I thought we would never successfully breastfeed, I would hear her voice in my head. So we kept at it and would try latching on once or twice a day.

Finally, 38 days after she was born, my daughter came home. I found a lactation consultant who helped me work through some of our breastfeeding issues. Then sometime around her due date, my daughter seemed to just get it. She latched better, stayed on the breast until satisfied, and was able to do more and more feedings like this. After three months of what felt like constant pumping, I decided to stop. I got a little more sleep. My daughter gave me the best gift of five consecutive hours of sleep.

My daughter is now eight months old, and she is breastfeeding like a champ. We are planning to start introducing some foods soon. I hope to continue to breastfeed until she wants to stop. I am thankful we did not give up, but it took more patience than I would have ever thought.

How did you find La Leche League?

When Renee was growing up, she was aware of La Leche League because her mother was involved with a local Group. As she prepared to give birth, Renee planned to use a doula who happened to be someone her mother knew through their mutual involvement with LLL. One of the lactation consultants Renee talked with during her daughter’s stay in the NICU was also a Leader, and Renee has attended meetings with her local LLL group.

How did La Leche League become part of your life? We’d love to hear your story! Please send yours to Amy at [email protected].