Nursing a Baby with a Colostomy 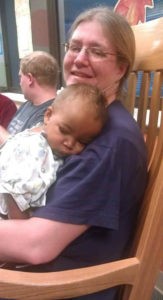 I became a mother on October 8, 2004, when my first child—a son—was born. My first breastfeeding experience was challenging. I met with a number of lactation consultants and exclusively pumped for six months. My fourth child (and third son) was born six years later, on November 28, 2010. By this time, I figured I had seen it all when it came to birthing and nursing. I thought nothing could challenge me now. Zayd was very sleepy after his first short nursing session, but that didn’t worry anyone. I ended up finger feeding him after we arrived home, but I had overcome that, too. He would learn, I thought.

But there was something different about this baby. There were no explosions of meconium—just a constant leaking from his bottom that didn’t look like any baby’s bottom. By Monday morning, I was worried enough to tell my pediatrician’s nurse that I didn’t think we should wait for an 11 a.m. appointment. I was going to bring him in immediately.

By 11 a.m., we were at the hospital and my son was being admitted for surgery. He had been diagnosed with an imperforate anus. (Editor’s note: An imperforate anus is a congenital birth defect in which the opening to the anus is missing or blocked.) I met the surgeon later that day. He helped my son have a bowel movement. After that, Zayd latched on like a pro.

Two days and what seemed like a million tests later, my son had surgery for a colostomy, during which the surgeon brought one end of the large intestine through an opening made in the abdominal wall. This would allow my son to have bowel movements. Zayd had a narrow rectum and a very small opening for his anus.  He needed to weigh 20 pounds before he could have the surgery to remove the narrow bit of colon and connect the normal colon to his bottom, allowing him to poop normally. Then he would need to heal for six to eight weeks before he had another surgery to remove the colostomy.

He didn’t use a colostomy bag, which made it easy to forget he had a medical condition. Zayd was like most other babies. At his six-month checkup, the surgeon was a bit concerned about his weight. We thought that adding solids without replacing nursing would add needed calories to his diet.

At eight months, despite normal output for his age, he hadn’t gained weight and wasn’t taking solids well. A swallowing test showed normal swallowing ability and his anatomy from mouth to stomach appeared normal. Two weeks later, Zayd had actually lost a little weight. The pediatrician referred us to a gastroenterologist.

When the gastroenterologist ordered a test that required nothing by mouth for several hours during the night, I was amazed at how easily my son was calmed. This was my first realization that something might be seriously wrong. None of my other babies would have accepted nursing restrictions so easily.

Zayd had an endoscopy, which tested for reflux. He had to be given anesthesia for this test. We stayed in a recovery room on the children’s wing of the hospital. We were supposed to go home later that day. Then the pediatrician said that Zayd’s electrolytes were seriously unbalanced. We spent the night. We were sent home the next day with a feeding tube to use overnight. He was supposed to nurse as normal throughout the day and be offered solid foods. His test showed some reflux, so we were given a prescription for that.

By this time, Zayd was ten months old. The feeding tube lasted one night. When he pulled it out, I went to the pediatrician’s office; then we had to return to the pediatric ward at the hospital to have it reinserted. His blood work again showed the imbalance of electrolytes. They had been normal when we were discharged on Saturday. I was told we would not be going home.

I didn’t know at that time that we would be facing a month-long stay. When the nurses began to feed him through a feeding tube on that first night, I was still allowed to nurse on demand. After about two hours of tube feeding, I noticed that his belly was swollen. It looked ready to burst. I called the nurse, and she agreed it didn’t look right. The doctors ordered all feedings—including nursing— stopped.

We attempted to feed him again, this time more slowly and with smaller amounts. I wasn’t allowed to nurse because we couldn’t tell how much he was taking in. I began to pump and cried when I saw how little breast milk was in those bottles. Zayd’s belly swelled no matter how little he was fed.

My tiny boy weighed just over 12 pounds. He underwent many tests. One test revealed an enlarged colon. He spent a week receiving total parenteral nutrition (TPN), which supplied all of his daily nutritional requirements, through a central line in his chest. After that week, another tube was placed in his nose going all the way to the first part of his small intestine, and feedings of hypoallergenic artificial baby milk were started very slowly. During all of this time, I pumped for him and could not nurse.

After one month, he was taking all the nutrition he needed through the tube. It was time to start nursing again. I was excited and scared. Would he remember how to nurse after all this time? I shouldn’t have worried. While his first latch was painful, he was able to nurse right away! We were discharged two days later, with a feeding tube in his nose and normal bowel movements.

We were home for two days, with no laxative use as ordered by his doctor, when the vomiting started. (He had been on a senna laxative during most of that hospital stay.) I called in daily for the next two weeks. It finally came down to a meeting with all three of his doctors. Throughout this journey, his gastroenterologist had wanted me to stop nursing. That set the tone for the next year we would spend under his care. 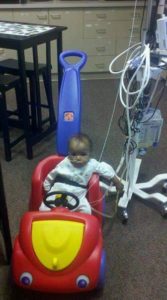 At the meeting, we discussed again the theory that a food allergy caused his issues. I was adamant; he had been fine with breast milk for six months. The problem started when we added solids, and no, I was not going to take him home, and discontinue nursing and all other foods for two weeks to see what happened. I had watched my baby suffer for two weeks since we left the hospital, and we were going to take the next step to help him.

Zayd was re-admitted to the hospital. He had surgery—called a revision—to enlarge his colostomy. He also had a feeding tube placed into his stomach. During part of this stay, I did not nurse. We very slowly worked the feedings back up to what they recommended to help him gain weight. We were discharged two weeks later with the tube. Zayd was nursing and eating solid foods. We never received an answer as to why his colon became enlarged in the first place, only options on what to do that might help. We chose the revision surgery because it was the best option if he no longer needed the colostomy.

Zayd grew steadily. He learned to walk and added words to his vocabulary daily. He was gradually weaned from the feeding tube. I laughed after the last gastroenterologist’s appointment. The doctor had just told me how wonderful he looked and to keep doing what I was doing when my 21-month-old lifted my shirt and demanded to nurse. After all his negativity toward us continuing to nurse and the necessary temporary weaning times, we had come out on top!

Zayd had his two surgeries—one for reconstruction and one to close his colostomy—at 20 and 21-months-old. He was able to nurse shortly after each surgery, and each stay was two or three nights. He weaned when he was three because he was too busy playing with his siblings to nurse and nap! He is now five-and-one-half years old.

We welcomed a baby girl, Saniya, in April 2015. I’m happy to say that she’s healthy and has been nursing perfectly since birth.

← Traveling with a Breastfed Toddler
My Experience with Fibromyalgia and Breastfeeding →