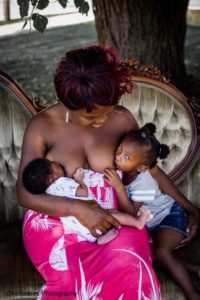 I guess my experiences with tandem nursing really began when I was pregnant with my son. My daughter was two years old and was still nursing often. I didn’t know anyone who had tandem nursed but had become familiar with the idea through attending La Leche League meetings and reading some of the books my Group had in their library, such as Mothering Your Nursing Toddler and The Womanly Art of Breastfeeding.

Before this pregnancy, I experienced a miscarriage very early on and worried that it happened because I was still nursing my daughter. A La Leche League Leader assured me, though, that there is no evidence that nursing during pregnancy causes miscarriages.

I was in my second trimester when I noticed some changes. My milk supply decreased and, at the same time, it became much more uncomfortable when my daughter nursed. My daughter’s latch no longer felt right, and I sometimes had a “nails on the chalkboard” feeling when she did nurse. I’d read that some children weaned during pregnancy, but my daughter showed no signs of wanting to stop. So, while I did have discomfort, I didn’t necessarily want to completely wean her.

I knew that there were times when my daughter asked to nurse and it almost seemed to be because she was bored or was just asking out of habit. It was almost a guarantee that if I sat down in our green recliner – our “regular” nursing spot – that she would climb into my lap and ask to nurse. I made a point of not sitting in the green recliner as often, and it did cut back on a few of those less necessary (for lack of a better word) nursing sessions.

My daughter nursed all through my pregnancy and didn’t stop once my son was born. At first, whenever my son nursed, my daughter would climb into my lap and ask to nurse at the same time. We did this sometimes, but I also asked her to wait at other times when I felt way too touched out. She usually had no problem waiting, and she could be easily distracted when another adult, such as her father, was at home to do something with her.

We settled nicely into tandem nursing (other than the previously mentioned “touched out” moments), but soon I could see that sometimes when my daughter asked to nurse it was just like during my pregnancy and she was bored or was asking out of habit when she saw me nursing her little brother. And now that she had a sibling, I thought she might also be trying to get my attention since I was not always focused on her as much.

I remembered a conversation from a La Leche League meeting early in my pregnancy where weaning was discussed. The Leader shared an idea that had worked for her a few years earlier. She took a jar and filled it with slips of paper that had fun activities that her daughter would enjoy: reading a book, going for a walk around the block, coloring a picture together, having a special treat, snuggles on the couch, etc. She labeled it “Sara’s Jar of Fun.” Then, when her daughter (Sara) asked to nurse, she would offer her the jar to pick out an alternative to nursing. While her daughter didn’t always want an alternative – which was okay! – the Leader found it was effective in finding other ways to connect with her daughter that didn’t involve nursing.

I decided to try that with my daughter, and it turned out to be really helpful and fun during this stage. My daughter continued to nurse on and off for a while longer; she was around four when she officially weaned. My son has now weaned, too, and did so earlier than my daughter. He never seemed to need quite as much comfort from nursing as my daughter did, so his weaning happened much more quickly and without a Jar of Fun.

I’m so glad I was able to experience tandem nursing and also have different weaning experiences. It really showed me how true it is that each nursing relationship is different and that listening to your child and taking into account their emotional maturity shows you what they are ready for and when they can take the next step toward more independence.