From infancy on, children need loving guidance which reflects acceptance of their capabilities and sensitivity to their feelings. – La Leche League International philosophy statement 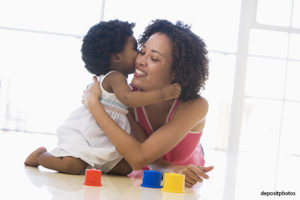 I was raised in a home where there was a very clear definition of discipline as punishment. If I did something wrong, my punishment – my correction – was in the form of a time out, a grounding, sometimes even a spanking.

It wasn’t until many years later when I started attending La Leche League meetings with my oldest – then about four months old – that I learned about the idea of loving guidance. This was a concept that I saw come alive as the months passed and my nursing relationship with my daughter grew and flourished. As we got to know each other better, I learned her cues. I could see when she was overwhelmed by noise or by too many people. I could tell that her crankiness and tears were because she was hungry – not because she was being “difficult.” I learned that if I understood her unique personality and what she could tolerate in any given moment, then I could help guide her throughout the day and lessen her frustration – and mine!

Of course, it’s relatively easy to do this when your child is an infant and her needs are usually met at the breast. Tired, hungry, sick – nursing was my go-to. As my daughter grew older and mobile and more independent, though, I discovered how the connection we forged in our nursing relationship extended to helping her understand the big, new emotions she was experiencing as her world expanded beyond my arms.

An example: As a parent, you’ve probably experienced less than desirable behavior on your child’s part in a public setting. During my daughter’s first couple years, I had a friend who was always on the go. She often spent entire days taking her son to visit friends, shop, etc. While I enjoyed accompanying her every once in a while, I soon discovered that this was also an ideal way for my daughter to have a meltdown. She was much less tolerant of the long days away from home than my friend’s son was, and it didn’t take me long to see that we couldn’t be constant companions. This was an early revelation to me that loving guidance involved not just responding to my daughter’s behavior, but also giving her an environment that would not take her beyond what she was able to successfully deal with at that point in her development.

Back to those meltdowns. Despite the best efforts of all parents, there are days when your children are just not going to be happy. There will be tears over what seem to you to be the most insignificant thing. There will be squabbles with siblings. There will be outbursts over parts of your routine that have been in place for months and were working perfectly well.

It was one of those days – my daughter was around five years old – and we were closing in on bedtime. I don’t recall what happened this particular time, but my daughter was once again in tears and I could feel the frustration of the day about to boil over in my response to her. I needed to step away for a moment and take a deep breath. What I really wanted to do was lock myself away in a room and completely ignore the cries. But when I stepped away to take that breath, I suddenly thought back to the early days of our life together – of those tearful moments when what my daughter needed more than anything was my presence, even if she wasn’t immediately soothed. So, I went to where she lay – face streaked with tears and flushed red with frustration. I sat down next to her, placed my hand on her back, and started talking. I doubt I had any magic words at that moment, but I empathized with her feelings of being tired, angry, out of control, etc. Whatever I did in that moment helped her to calm down enough to see that she was being heard and understood, and helped bring that long day to a close.

The use of loving guidance as your child grows doesn’t mean that you will have a perfectly behaved child or that you will respond exactly as you should in the moment. As I look back now – my daughter is now a college student – I’m grateful that the relationship I began cultivating those many years ago in our nursing relationship turned into a partnership – so to speak – as I helped her begin navigating the world before her, accepting and respecting, as the LLL philosophy statement says, her capabilities and maintaining a sensitivity to her feelings.

← My Family, My Support System
I Was Grateful For Breastfeeding When… →