Editor’s Note: A version of this article originally appeared in the July-August 1999 issue of New Beginnings (Vol. 16, No. 4) on pages 116-19. It has been updated and edited with the author’s permission. 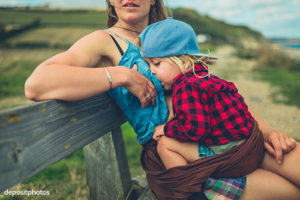 Several years ago, when my first child was around two, my husband’s younger sister joined us on vacation. While we were walking near the beach one afternoon, my son, David, asked to nurse. My sister-in-law asked with surprise, “He’s still nursing?” Time almost stood still for me as possible responses ran through my head. I decided that my sister-in-law, who was not even thinking of having children yet, actually knew very little about breastfeeding and was simply expressing surprise that a baby could nurse as long as two years. I took a deep breath and said, as calmly as I could, “Yes, isn’t that wonderful? I’m really proud that we’ve been able to keep it up so long especially because I went back to work part-time.” She seemed satisfied by my answer and the moment passed, leaving both of us with our dignities intact.

How we respond depends upon the source of the comments (who), the underlying reason for the criticism (why), the topic (what), and the place it happens (where).

Questions and comments can come from many sources. Grandparents may be the most common commentators. Sometimes these comments are more pointed if you have the first grandchild in the family or are the first to breastfeed a baby. “Are you still starving my grandson?” said one father-in-law to the mother of a seven-day-old baby. As upsetting as it can be to hear criticism from grandparents, criticism from our parenting partner can feel most like a stab in the heart. We may also hear such comments from our friends (whether they are parents or not), our neighbors, our siblings and other family members. Many parents have had the experience of a random stranger’s unsolicited comment. “Oh, it’s so cold out today. Where is your baby’s hat?”

It always helps to look for what has been called “the question behind the question,” that is, the motivating factor. The reasons vary, but generally people question your parenting style when you have made a choice that is different from the perceived norm. They may be confused about what you’re doing or worried about your baby. Usually, the people who comment on a parent’s choices care about them. Surely a grandparent’s underlying concern is based on love for a grandchild. Identifying the motivation behind a particular comment can help put it in perspective and help you decide how to handle it.

Relatives from the previous generation may feel an implied criticism when we do things differently than they did. Imagine a grandmother’s feelings when her own child does things she is unfamiliar with, for example, breastfeeding or avoiding spanking as a parenting tool. She may feel that if her now-grown child rejects her parenting choices that it means they are rejecting her, too. Or she may be afraid that her child thinks she did a bad job of parenting. Such feelings usually remain unspoken, but they can cause a great deal of anxiety.

A parent’s own feelings can affect their responses. When someone expresses concern about an issue that is of little import, it’s often easy to shrug it off. But when you’re questioned about issues that are close to your heart, or ones that you are struggling with, you’re more likely to hear the concern as criticism. One mother comments that if someone criticized her choice of car seat or her quiche recipe, she’d be amused because she doesn’t have an emotional attachment to her car seat or her quiche. But if someone criticized her toddler’s behavior, she’d be more likely to feel defensive because she feels that his behavior reflects on her mothering ability even though she knows that much of his behavior is developmental and will pass with time.

Thinking ahead about ways to handle criticism can make you feel less vulnerable to comments from others. Five possible methods of responding are to ignore, inform, use humor, acknowledge, or empathize.

When you don’t know what to say, you can ignore the comment by saying nothing, avoiding eye contact, walking away, or changing the subject. A non sequitur can be a subtle way to ignore by refusing to be drawn into the discussion. For instance, the classic reply to “How long are you going to continue nursing him?” is “Oh, about 10 more minutes.” Changing the subject might work at a family gathering. “Oh, Adam, I wanted to be sure to ask about your new job. Tell us how it’s going.” By giving a response that avoids the underlying question, you can sometimes steer the conversation away from a subject that you’re not interested in debating.

When a question comes from a stranger, ignoring it and simply walking away may be the best response. Just because someone asks a question doesn’t mean you have to answer it. After all, when a stranger criticizes your parenting, they are being downright rude and intrusive.

A second method of responding is to inform. For example, if someone expresses disapproval about nursing a toddler, you can offer the information that some parents nurse a child longer than two years.

Informing can be very effective with someone who likes authority and references. If you can respond by saying that your baby’s doctor recommends the choice you’ve made or by referring to a book that documents the benefits of your approach, the questioning may stop. People may be more likely to believe an idea is valid if they see it in print. Even someone who appears on television may be given more credibility than you. Offering information also makes it clear that you have made your choices thoughtfully and it can pave the way to better understanding.

Humor can be a great tension reliever. Making fun of the situation may diffuse the criticism, and if you all get a good laugh, all the better. Joyce S., an LLL Leader in Vienna, Virginia, recalls a story she heard at one of her earliest LLL meetings. “The Leader’s father-in-law questioned her about when she would wean her baby. Her response was ‘If his prom date has a problem with his nursing, he’ll have to find another date.’ The father-in-law never asked the question again.”

Humor works best when delivered gently, with a genuine smile. Sarcasm, while sometimes seeming funny, can cause hurt feelings. Poke fun at the situation, not at the people involved.

A fourth method of responding is to acknowledge the other person’s perspective without agreeing, or to turn the question around to shift the focus. To acknowledge the other person’s viewpoint, you can simply restate it as Karen of Reston, Virginia did when her mother-in-law suggested Pat put her baby in a playpen at a family gathering “I know you think that it’s a mistake for us not to use a playpen. We just don’t intend to get one, so let’s agree to disagree, and not talk about it any more.”

Shifting the focus is a way to let the other person talk about his or her experiences. Inviting a grandmother to recall when her children were babies is a respectful way to let her offer her expertise without agreeing to take her advice. “What was it like when you started solids? Did you find that your babies took to it easily?”

When you empathize, you let the other person know that you understand how he or she feels and why. You are opening the door to further conversation. This type of response is also called reflective listening or empathetic listening. To respond in this manner, it is necessary to drop your own agenda, that is, to set aside your defensiveness, and listen with the intent of understanding the other person. When you believe you understand how the other person is feeling and why, you can open the door to discussion by responding along these lines, “You’re worried about Fiona not starting solids yet because you believe she’s not getting enough to eat.” Responding empathetically will not cause the other person to drop the subject, but it will allow for constructive and respectful discussion.

There is no one right response to a given criticism. A comfortable response for you will be based not only on your natural style, but also on who is criticizing you and the issue at hand. For example, you may feel comfortable ignoring a comment from a stranger but find it impossible to ignore a comment from your partner. Or, you may feel comfortable using humor with a friend but find you need to offer information to your parents.

Recognizing the parenting choices that matter most to you can help you prepare to respond.

It is possible that a parent invites criticism when they are uncertain about a parenting decision, perhaps because what they have been trying hasn’t worked as well as they would have liked. Laura C. of Fairfax, Virginia says “I avoided a lot of criticism by presenting myself as a confident parent. I’ve found that when I am not feeling tenuous or conflicted- or at least not appearing that way- others are less likely to question or criticize me.”

Confidence is contagious. When we believe in our parenting choices, we express ourselves with confidence. Expressing confidence can be the best way to prevent unwanted criticism and questioning.

And what about my sister-in-law? It has been years since our conversation on the beach. She has started a family and she began attending LLL meetings during her pregnancy. When her baby turned one, she wrote to tell me she was excited that they had “graduated” to attending toddler meetings. Imagine that, my sister-in-law is happily nursing a toddler! I can’t help feeling that my confident answer to her question and my own happy breastfeeding relationship had a big impact on her. I feel a special pleasure that my sister-in-law and I have the joys of breastfeeding in common.

← Hard Things Get Better
Family Fun: Recipes For The Holidays →