Why is Mothering Lonely When We are Never Alone? 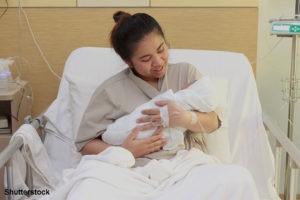 A Look at Baby Blues and Building a Mothering Community.

Who would have thought that motherhood could feel so lonely despite being surrounded by little ones all the time?

It is a conundrum: wanting to be with our babies all the time, but also feeling isolated by our new mothering roles. Often, before becoming mothers, we imagine those early days with our newborns as an airbrushed, blissful mirage. We envision ourselves quietly gazing upon our beautiful, peaceful babies and still feeling like our pre-baby self. For some, the postpartum period is just that: a glowing, lovely time to drink in every moment with baby. For others, it is a real struggle.

Mothering in the early days can be best summed up in one word: more. The birth might have been more difficult, breastfeeding more time-consuming, the exhaustion more overwhelming, mothering responsibility might feel more demanding, the love more breathtaking. All of it might leave you feeling as though your head is spinning.  And, who’s kidding who? Those postpartum hormones can pack a serious punch, leaving you feeling rather strange—like a stranger to your old self, isolated in your new role, isolated inside your house as you heal, isolated as you sit alone and breastfeed your newborn.

After baby’s birth, Western society often seems to expect women to jump right back into their pre-baby roles (and their old jeans while they’re at it). Postpartum practices around the world are much more supportive of the mother-baby dyad in the early days, and as a result, mothers and babies start off with a better chance to find their own footing and make their own way with confidence. According to the article “Postpartum Beliefs and Practices Among Non-Western Cultures,” by Yeoun Soo Kim-Godwin, PhD, MPH, RN, the postpartum period in many worldwide cultures is protected and valued through deep-cultural beliefs.

This excerpt from Kim-Goodwin’s article (originally published in the March/April 2003 issue of The American Journal of Maternal/Child Nursing) discusses some of these cultural differences:

Some Differences Between Western and Non-Western Postpartum Practices

In the traditional non-Western view, birth is part of a holistic and personal system, involving moral values, social relations, and relation to the environment, as well as the physical aspects. Birth ceremonies often are used to recognize the importance of the event in the culture (Leininger, 1995). Special foods are prepared to express the reward of motherhood, as well as to symbolize a new baby’s entry into the family and community (Callister & Vega, 1998; Leininger, 1995).

In contrast, Western postpartum practices are based on the biomedical model. In a Western framework, pregnancy might be “managed” by a physician who performs a special medical or obstetrical role (Lauderdale, 1999). According to Davis-Floyd (1997), the message conveyed to American women is that the role of the woman is less important than that of the physician during birth. Gifts and celebrations are centered around the newborn rather than the mother (e.g., baby showers, christenings, visits from friends and relatives to see the baby) (Lauderale, 1999). It is interesting that women’s status has been considered relatively higher in Western cultures than in non-Western cultures, yet paradoxically less recognition seems to be given to new mothers in the United States.

Perhaps taking a few of these cues from non-Western cultures—considering the postpartum time to be sacred, honoring the body of the woman, and fostering the mother-baby connection—would help smooth the transition of the Western woman into motherhood. 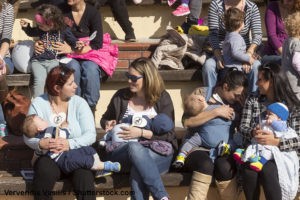 The Womanly Art of Breastfeeding discusses our hardwired human desire to create networks for ourselves. Tribal communities celebrate and support motherhood, and in the process foster mothers who are confident in their mothering and breastfeeding skills. Tribal women have observed mothers and babies nursing through all stages, from the newborn’s mother with sore nipples, to the acrobatic six-month-old, and beyond that to a nursing toddler finding his way back to his mother for comfort.  Because the mothering-breastfeeding journey is often a little more secluded for Western mothers, the mothering journey can easily feel a little more isolated, unsure, and lonely.

Here are some ideas to help establish a support network.

Create community. Finding a network of support can make all the difference.  Talking with other women going through the same life transition can be reassuring and reenergizing.

Getting out might feel overwhelming. You only have so many arms and so much control over last minute feedings and extra diaper changes. Allow extra time to get out the door, and remember that practice makes progress. It will get easier. Finding other new mothers to talk with about the huge life changes that arrive along with baby can be comforting at the very least, and if you’re lucky, can also be intensely therapeutic. Here are some bring-baby-along resources to try:

La Leche League. Check out www.llli.org to find a Group nearby. They are a haven of mother-to-mother support and encouragement.

Hospital-based Lactation Support Groups. There are a growing number of these that are often free and open to all mothers, even if you didn’t deliver at that particular hospital.

Online Support. Community online mothering support networks are popping up all over the place. Many coordinate playgroups, dinner swaps, and more.

Exercise helps to boost your mood and reduce stress. Wear baby in a carrier or get out the stroller and go for a short walk. The fresh air might calm both you and baby. In the early days, it can feel as though you are becoming permanently attached to your favorite nursing chair. Looking at the same four walls gets old pretty quickly. The change of scenery helps more than you’d think.

Sleep when baby sleeps. And really do it. Really. A little sleep when struggling with sleepless nights can provide a whole new perspective. Daytime naps can be a beautiful thing for the tired new mother. 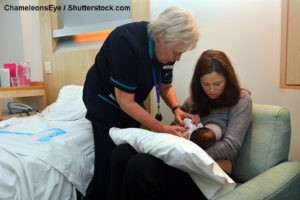 Know when to see your doctor. The transition to new motherhood can feel unsettlingly overwhelming. Many new mothers find themselves asking, “Is that what my life will always feel like now? What have I gotten myself into? Will I ever feel like myself again?” These questions are normal, and feeling your way through them is normal too. Often these feelings evaporate after a few weeks or months as you find your new groove. However, if breastfeeding and mothering don’t feel like any fun at all, and the anxiety and unhappiness persist, it might be time to talk to your doctor.

According to the National Institute of Mental Health, 80 percent of women struggle with some form of baby blues, and 1 in 15 mothers experience postpartum depression. Even though this might feel like a lonely and overwhelming time, you are not alone. Not by a long shot. Opening up about your experiences with other mothers might feel too close to a raw and vulnerable nerve, but this is a topic that is vastly under-discussed, leaving many new mothers alone and struggling. Let’s bring the topic out of the closet. Even if you are experiencing a difficult postpartum period, you don’t have to be alone.

Take time to breathe, mother the mother, and see if you can’t turn the negative, overwhelming, and lonely parts of new motherhood into positives. Start by building yourself a community network. A great place to start is with a local La Leche League Group. Quality support that encourages your mothering instincts can help you to feel more empowered, more enraptured by your amazing baby, more bonded, more in touch with your intuition, and more proud of yourself and amazed at what your body can do.

← Upcoming LLL USA Events
Looking Back: It All Comes Out in the Wash →