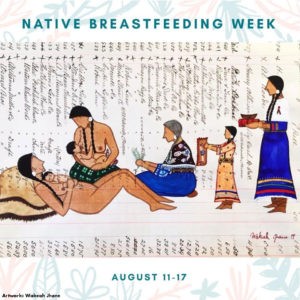 What is Native Breastfeeding Week?

There are so many people who work across Turtle Island* to ensure all parents have the access and opportunity to reclaim their right to freely nurse their children for however long they need to or are able to.

This community also hopes to address the inequity and injustice of Indigenous mothers and their abilities to practice their roles in accordance to the tribal communities they descend from.

Breastfeeding is defined as “the natural feeding of babies and young children with milk from a woman’s breast.” We also recognize gender non-conformity, and language also will include chestfeeding individuals.

Native Breastfeeding Week will occur during the week beginning on the second Sunday in August, which is recognized as National Breastfeeding Month in the United States.

Why does Native Chest/Breastfeeding Matter?

According to the Centers for Disease Control and Prevention (CDC), the current literature on breastfeeding patterns among American Indian/Alaska Native (AI/AN) mothers is scarce, thus warranting further research.

Based on the limited data, AI/AN mothers have lower rates of breastfeeding initiation (introduction of breastfeeding within one hour of birth), duration, and exclusivity relative to other racial/ethnic groups except for African Americans:

So, this community is to put a face to the data and to share the contributions, importance, adversity, and celebration of Native breast/chestfeeding families. 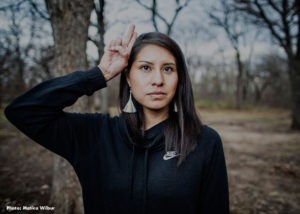 Who is Native Breastfeeding Week?

Native Breastfeeding Week is a collaborative effort of Indigenous breastfeeding counselors, breast/chestfeeding advocates, community health nurses, lactation consultants, and birth workers as well as breastfeeding mothers/folx. The initial idea originated from our Oklahoma collaborator, Jasha Lyons Echo-Hawk (Seminole/Pawnee/Creek/Omaha/Iowa), a community advocate, public speaker, Birth Doula, local lactivist, and unapologetic brelfie-taker. The intention was to create a space for visibility of all Native Breast/chestfeeding experiences, to learn from each other, celebrate each other, and to call attention to the context of injustice of Native parenting.

Jasha says, “Lactation is my superpower, but it also seems to be treated like a privilege and not a sovereign right regardless of whether you’re Indigenous or not.

“Colonization and patriarchy have starved most of us physically, spiritually, and culturally. It started by starving off my ancestors so chest/breastfeeding relatives couldn’t provide the first food, and they were reduced to cancer-causing rations which didn’t supply their bodies with the adequate nutrients needed for lactation…my fight will always be for cultural and community restoration of basic human rights.

“I will also fight for access so all parents who can and want to breastfeed will have that right. Anytime, anywhere, on-demand, and “extended breastfeeding” is not a taboo, but culturally relevant and respected. I want to continue reclaiming that connection to my roots as a tribal descendant of so many communities. We are fighting adversity and healing generations.”

*Turtle Island is the name many Indigenous people use to refer to the earth or North America.
**UNICEF Global Breastfeeding Scorecard