I have three children, and my experiences with helping each of the two oldest adjust to the addition of a sibling has been different with each of them.

When my oldest was born, we only had our furry canine “baby” waiting at home. The subject of helping family pets adjust to newborns could be a blog post in itself, but I want to share about our experiences with human siblings. 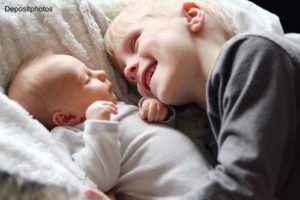 I’m probably not the only one who, as I waited for my second child to arrive, was filled with a mixture of anxiety and guilt. My daughter would be three when my son arrived. Her days of being the sole focus of her father and me would soon be over. How would she react to her brother? Would she be excited and give him kisses and hugs? Would she refuse to even look at him? I remember feeling guilty that I was “doing this” to her.

We involved Abby in the pregnancy as much as possible. She came along to prenatal appointments and listened to the baby’s heartbeat. We read new sibling books together. Baby On The Way by Martha Sears was one of those books. When we set out baby clothes and diapers, we showed Abby some of the onesies that she’d worn as a baby.

I knew that no matter what we did during the pregnancy, the reality of having a new baby in the house would be something we could never truly prepare Abby for and we were going to have to be patient with her as we all settled into the new family dynamics. Our adjustment to being a family of four actually went much more smoothly than I expected. I don’t know if it was partly because of Abby’s laidback, quiet personality, or if it helped that she was still nursing. Perhaps sharing those moments of tandem nursing allowed Abby to process the changes of daily life a little more easily.

It didn’t go quite as smoothly for my son when baby #3 arrived. Just like with Abby, we included Jack in all of the preparations for his little sister’s arrival. We also had the added bonus of attending La Leche League meetings several times, and he had the chance to observe big sibling-little sibling interactions. He was about six months younger than Abby had been when he was born – around 2 ½ years old. Perhaps that was enough of an age difference for it to be more developmentally and emotionally challenging for him when Molly was born.

When I look back at photos of those days, I have so many with Jack hugging Molly or patting her head and smiling at her. I don’t have pictures of the phase he went through, though, where we couldn’t set Molly down on the living room floor on a blanket because Jack would almost always come over and try to kick at her as soon as he saw her stretching and cooing at us. Thankfully this phase didn’t last more than a few weeks.

Jack had weaned during my pregnancy with Molly. I don’t know if this factored into his behavior at all. Jack was a much more vocal and physical toddler than Abby had been, so perhaps this was just a way he processed the changes without understanding that he could potentially hurt his little sister.

While these three definitely still have their ups and downs – just as with any sibling relationships – they are also good friends. They watch out for each other and stick up for each other, too. I’m sure there are things I could and can do differently as I parent multiple children, but I think one of the most important things to remember about helping older siblings welcome a new baby into the family is to show them that their place in the family hasn’t changed and that they are just as important and loved as the new baby.

← Looking Back: It Makes A Difference
Encouragement Through the Struggles: Part 2 →