How Breastfeeding Helped Me Potty Train My Child 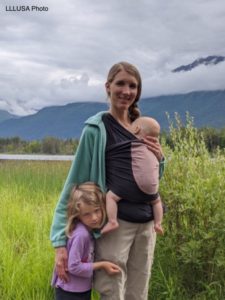 My daughter was two years old when I discovered that our breastfeeding relationship could help me potty train her. I was intrigued. She was my fourth child. I already had experience potty training my three older children, but none of them had been breastfeeding during that time. Had I uncovered yet another benefit of breastfeeding?  Was there one more useful approach to help my child learn to manage her bowel movements? Now that a couple years have passed since this discovery, I’d like to share my reflections on how breastfeeding helped me potty train my child.

First and foremost, I believe that my goal for long-term breastfeeding resulted in a chain reaction of positive consequences, which included successful potty training.  Even before my daughter was born, I felt determined to breastfeed her for as long as possible, aiming for child-led weaning. To encourage an extended breastfeeding relationship, I adjusted my lifestyle so that I was available for on-demand nursing. I kept her near me throughout the day and night, which allowed me to respond quickly to her nursing cues for hunger and comfort. Breastmilk was her main source of nutrition until she was one year old, and I did not use pacifiers and bottles. To my satisfaction, I was able to maintain my milk supply for a long period of time, and my daughter was the first of my children to breastfeed past the age of two.

Not surprisingly, our breastfeeding relationship led to spending a large amount of time being physically close. As a La Leche League Leader later pointed out to me, “When a mother is breastfeeding, she tends to be very in tune with her child’s emotional and physical state. There is so much that we pick up on that we probably don’t even realize we are aware of.” This certainly became true for me. I remember one particular nursing session in which my two-year-old sat curled up comfortably on my lap. As she nursed, I was suddenly aware that her diaper region began to feel warm. I realized that my daughter was peeing.

“Are you going pee-pee?” I asked my daughter as she continued to nurse. She smiled up at me. She already knew the vocabulary our family used for bathroom terms. Now she was beginning to make the connection with those words to what her body was doing in that very moment. A new realization dawned on me: I could teach her about her bowel movements as I breastfed her. Our physical relationship had led to communication.

Over different nursing sessions, we continued to communicate about what her body was doing. Sometimes in the middle of breastfeeding she would stop nursing and tell me she needed to use the bathroom. I was pleasantly surprised when my daughter transitioned out of diapers at an earlier age than her siblings had done. I observed that she had very few issues with night accidents, which may be attributed to the fact that she still nursed at night. 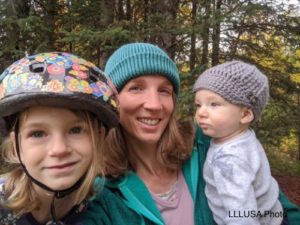 I imagine that our breastfeeding relationship also allowed her a time to calm down and tune into her bodily needs. She learned to recognize not only her need for food, sleep, and comfort, but also to know when she was having a bowel movement.

When my fifth child was born, I felt more confident in helping him learn to potty train, especially after a friend introduced me to the concept of elimination communication*.  Like I had done with my daughter, I kept him nearby to breastfeed, which in turn helped me recognize when he had bowel movements. By the time he was six months old, he was comfortable being held on the toilet. Now at 10 months old, he can make a “puh, puh” sound (imitating the word “poo-poo”) when he is having a bowel movement. I look forward to seeing where this adventure takes us!

One of La Leche League’s philosophies states that mothering through breastfeeding is the most natural and effective way of understanding and satisfying the needs of the baby. An additional philosophy reminds that children need loving guidance which reflects acceptance of their capabilities and sensitivity to their feelings. I never imagined that my breastfeeding relationship with my children would influence my potty-training methods. I’m grateful for the opportunity breastfeeding allows me to parent with loving guidance, even in matters of bowel movements and urination.

*According to Wikipedia, “elimination communication is a practice in which a caregiver uses timing, signals, cues, and intuition to address an infant’s need to eliminate waste. Caregivers try to recognize and respond to babies’ bodily needs and enable them to urinate and defecate in an appropriate place.”

← Don’t Quit On A Bad Day
Pumping: Tips For Beginning →