I Can: Turning My Parenting Doubts Around 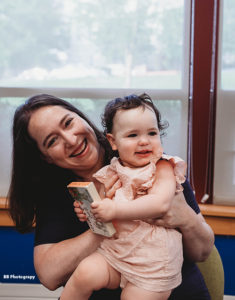 As a new parent, I was unsure of so many things. My experiences to that point were nothing like the books I read during pregnancy (I hadn’t yet been introduced to The Womanly Art of Breastfeeding.) Why did my daughter want to nurse every hour? “The books” told me it should be every three to four hours. Why wouldn’t she sleep through the night? “The books” told me she would and that I should let her cry a little if she woke up so she could practice putting herself back to sleep. Why wouldn’t she let me put her down for a little bit during the day? “The books” told me it was important that she have that time on her own.

Needless to say, “the books” left me feeling as if I couldn’t do anything right as a parent. I couldn’t satisfy her with less frequent feedings. I couldn’t parent her well enough so she would be happy day or night without my presence. It wasn’t until I attended my first La Leche League meeting when my daughter was about four months old that I finally understood that my mindset of “I can’t” was overshadowing the fact that, as a parent, my relationship with my daughter was actually full of “I can’s.”

One of the first things I heard at La Leche League meetings was that it is completely natural for a newborn to feed as frequently as my daughter often did. I learned that human milk is easily digested. I learned about the concept of supply and demand – the more my baby nurses the more milk I produce. I learned about growth spurts and that, especially in the early weeks and months, my daughter would probably have more periods of frequent nursing during this time in her life because she was helping my milk supply adjust to meet her changing needs as she grew.

I also learned about nursing personalities. While some babies are fairly quick and efficient nursers (this was my second child), others take a more leisurely approach to nursing sessions. I will admit that I continued to have occasional impatience when I had others things to do and didn’t feel like sitting down for yet another feeding, but I grew to appreciate this time of bonding with her and of being able to rest and take a break from my other responsibilities.

And, perhaps most importantly, I learned that there are many different reasons that a baby nurses – not just for hunger. This led to another big “I can” moment.

My daughter just wasn’t satisfied being out of my arms for long during those early weeks and months. Before she was born (and after I read those “other” books), I had an image of being able to set her down at night or for a nap, and she’d blissfully snooze while I slept or carried on with other things. Not quite. Once again, I learned that it was natural for my baby to want that close contact and that keeping her with me actually helped establish and strengthen our nursing relationship and our connection in general.

So, I stopped looking for ways to change this and instead worked to find ways to meet her need for close contact while I went about my day. The biggest tool I added to my parenting was babywearing. What an amazing feeling to have my daughter contentedly snoozing and sometimes just staring out at the world from a carrier while I focused on other responsibilities. At that time, I was also doing some freelance writing and was even able to bring her along when I interviewed subjects for articles.

I also changed the way I thought about nighttime parenting. It was no longer my goal to set her down in a crib and have an entire night of uninterrupted sleep. I learned about safe ways to keep my daughter nearby so I could meet her needs at night and also hopefully rest a little easier. I learned that my body actually produces the most milk at night and that I was helping my milk supply when I nursed my daughter then. 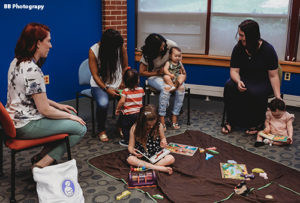 As I changed my negative thoughts about not being able to keep my daughter happy without my presence, I saw that what I was doing was meeting her needs so that she would confidently take steps toward more independence when she was ready to do so rather than when I felt she should do it.

These are just a few examples of how my early parenting doubts and fears were changed when I found support and information about typical infant development and behavior. I will forever be grateful for those early La Leche League meetings when I received reassurance that I wasn’t a failure and that my baby was supposed to be doing these things. Parenting can be such a lonely experience without that lifeline of connection and support. I just wish I had discovered La Leche League before my daughter was born. If I could share one helpful tip with an expectant parent, it would be to attend a La Leche League meeting before baby arrives so that you have a support system in place from the very first moment.

← Ideas For Exercising With Little Ones Present
Looking Back: Growing Away From Nursing →