Looking Back: Born With A Clubfoot 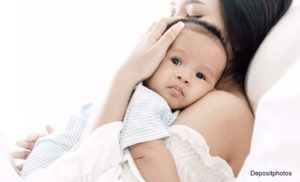 My joy in the delivery room was shattered when I heard my husband say, “What’s wrong with his foot?” Luke, our second child, was born with a clubfoot.

In the hospital the orthopedic doctor explained that a cast would be necessary to hold his foot and train it properly. Hopefully this would be all that was needed. Our infant was less than 24 hours old when he had his first cast put on. As he grew, the cast had to be changed; every few days at first, then weekly, and at last every other week for several months.

I also remember the doctor asking if I was going to breastfeed or bottle feed. I thought to myself, “Why would it matter to you?” After all, there wasn’t anything wrong with Luke’s mouth. Then he told us that it would be easier for him (the doctor) if a bottle was ready to put into Luke’s mouth when he was casted. But I knew that I could nurse him right after his cast was on anyway. This only made me more determined to totally nurse Luke.

When Luke was about six months old, the doctor said the casts weren’t going to do the whole job of making Luke’s foot normal. During this time of apprehension, I needed La Leche League more than ever. The Leaders always gave me the encouragement that I needed. When Luke was 11 months old, we went to the hospital. I stayed in Luke’s room three days and three nights. During the remainder of our week’s stay, my husband was able to arrange his schedule to give me a break or two each day. At no time was Luke ever alone without a parent at his side. By nursing Luke, I knew I was comforting him in a way that no one else could.

After the surgery, he still had to wear a cast but this time it went all the way to his hip. About two months later he started to walk, which made me feel much better knowing that he wasn’t too far behind in his development. Four months after his surgery the cast came off for good and he got his first pair of special orthopedic shoes.

At 17 months he weaned all on his own, and at first, I was sad and thought he didn’t need me anymore. Finally, I realized that I had better accept the fact that I was going to have to let this part of our relationship go. It seemed as if he was just more interested in playing with his brother than in nursing. Now as he gets older, I can see that he needs me in a different way.

Despite all these troubles he is a very loving and easygoing child. I feel that nursing Luke helped sustain both Luke and me through a very intense and trying time and that it was also helpful to the rest of the family. Now at 21 months he is starting to run and it’s not even noticeable that he was born with a clubfoot!

← Expectations
Kids in the Kitchen →