Looking Back: Less Than Ideal 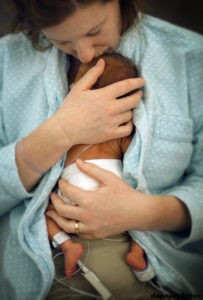 I am writing this to all the mothers who have not had or will not have the “ideal” delivery. I want to assure them they can still have a close bond with their child.

It has been 16 weeks since the birth of our beautiful daughter, Cara. Prior to her birth, my husband Jim and I had diligently practiced natural childbirth, and read everything we could get our hands on, and talked to anyone who would encourage us, in order to help prepare us for the birth of our first child.

Everything we had read expressed the importance of those first few minutes after birth for mother, father, and child. We read things such as, “At birth your baby is acutely aware…at no other time…will the potency for rhythm and intimacy between you and your baby be so strong…if (she is) not greeted and protected by her own human caregivers, in time she becomes less cuddly and responsive.”

Jim and I were both ready and anxious to do the “best thing” for our baby. However, things did not go quite as we had planned.

At 4 a.m. on the morning before my due date, I was awakened with an aching pain in my abdomen. I thought it was the onset of labor, but I didn’t have any contractions so I waited. At 1 p.m. the pain was intense but still no contractions nor any other signs of labor. I called the doctor and he told me to go to the hospital to be checked. When I got there I was only slightly dilated, but my blood pressure was elevated. The doctor admitted me because of the elevation. By 9 p.m. my blood pressure was critical and medication was not helping. The doctor tried to stimulate labor, but no luck. At 10 p.m. it was decided to take our baby by cesarean.

I was told later I had developed toxemia and the placenta had been separating from my uterus. My doctors said it was a miracle my baby was alive and healthy, not to mention that I was all right and did not require a total hysterectomy as the doctors had expected. I had been given a general anesthetic since time was of the essence. So I could not hold my baby as I had planned to do right after birth.

Cara was given to my husband after the pediatrician was sure she would be all right. He held her many hours at my bedside while I slept, unaware of what had happened. The first time I held my daughter she was 10 hours old. I immediately put her to my breast and she began to nurse as if she had been doing it “all her life.” It was so beautiful! I began to think of those precious first hours when I had been separated from my daughter. Then I remembered how blessed I was to even have her and became determined to prove the books wrong.

It’s been four months now, and with a lot of extra love Cara and I are developing a very special and beautiful relationship. Nursing is wonderful, and I don’t think she’ll ever hold those first “important” hours against me.

(Originally published) Editor’s Note: As Sharon has discovered, the first hours after birth are a special time but not the only time for developing a special bond of love with your baby. In The Womanly Art of Breastfeeding, it says: “Exceptional conditions can and do occasionally come up that may make it impossible for you to nurse as soon as you would like to…you can quickly make up for lost time when you and your baby can be together.”

← Upcoming LLL USA Events
From One Generation to the Next →