Looking Back: Mothers-in-Law, A Different Perspective 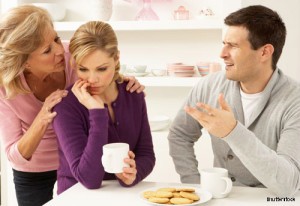 Editor’s Note: The first issue of La Leche League News, the bimonthly publication for members, was published in 1958. The name changed to New Beginnings in 1985. New Beginnings continued to be published until 2014 when it switched to its current blog format at www.lllusa.org/blog/.

Eight years ago, when my husband was in Vietnam, I went to live with my in-laws with our first daughter, who was three months old. I remember feeling I would just explode if grandmother said one more thing about using a bottle, and I even had my “telling her off” speeches all rehearsed in my mind. But I knew this wouldn’t really help our situation. And despite my bruised self-confidence and growing resentment, I knew that my mother-in-law and I still did share at least one common bond: our mutual love for her son, my husband.

I kept remembering my psychology teacher telling us, “Much of human behavior is motivated by the need to protect one’s own self-image.” In other words, we all need to feel good about ourselves and if someone makes us feel bad about ourselves, it is a natural reaction to defend our self-esteem by attacking the offender. Boy, could I identify with that because I felt that was exactly what she was doing to me; but could it be that she too felt that I made her look bad to herself?

I tried to put myself in her place and imagine what she might be feeling. My thoughts went like this: she has devoted her whole life to the love and rearing of her three sons. She did for them what she felt was right, with the support of her doctor: nursing the first two a short time and the baby (my husband) just a month. He did just fine on the bottle, she thought. The boys grew up and each one chose another woman to be the center of his world. I was the most recent offender, the baby snatcher. It occurred to me, “that’s got to be a hurtful process – to see a son grow up and away and then cleave to someone else when it was her mothering and nurturing that enabled him to do so in the first place!” She could comfort herself in knowing she mothered well, as her son is someone to be proud of. Then her baby suddenly had a wife and baby of his own. And on top of that, I had the audacity to succeed at what she had failed at: breastfeeding. Could this mean that her daughter-in-law (me) was a better mother than she? Could she have been a better mother? Certainly it was too late to wonder about that. 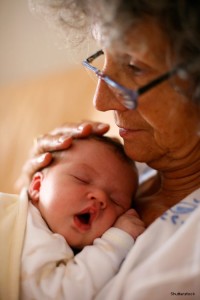 It became very clear to me that both of us were caught up in a vicious cycle of attack and defense of our own mother images. I tried to think of ways to break the cycle. I came to the conclusion that it really was not what I was doing that bothered her, but how what I was doing was making her feel about herself. I no longer felt the need to defend myself with endless explanations of why breastfeeding was better. I decided that I needed to let her know in some way that I thought she was a good mother even though there were many points on which I disagreed with her. After all, this woman raised the love of my life, and his strengths, and the wonderful qualities in him, are a direct result of her good mothering. I remember saying to her one day, “If my children grow up to be as responsible and considerate as Kent, I will have done something to be proud of.” She smiled, and the day went better because I was not defending my actions. The verbal attacks began to come far less often. When I did get a “Well, in my day…” lecture on, for example, delaying solids, I was careful to listen to all she had to say. Then I tried to make a non-threatening comment such as, “I know what I am doing must seem very strange to you, as it is different from what was recommended then, but I feel comfortable with it. It makes me wonder what new changes I will be facing when my children are grown.” I tried not to say, “You are wrong and I am right,” which would certainly invite retaliation. I tried to offer an acknowledgement that methods are different, an understanding of her questions, and finally agreement that changes are hard to accept.

I was sure at this point that she was not going to change her opinions. My attempts to enlighten her only seemed to increase tension between us. Like all relationships, it took working at (and still does) and the sacrificing of my normally outspoken nature, but the resulting respect and friendship were well worth it. She learned to respect my need to be me without feeling it threatened the worth of her own mothering experience. As for me, I could enjoy being with her without the anger and rage I once felt.

It is my hope that writing this down will serve to remind me to “live and let live” when it comes my turn to be the mother-in-law!

← Help Wanted
Breastfeeding and Weaning: A Personal Reflection – Part One →