Looking Back: Music and Mothering 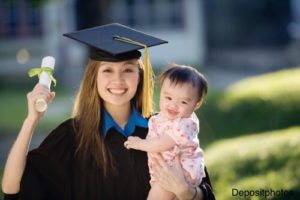 I began work on my master’s degree in music at a university in northwestern Indiana. After six years of marriage, John and I were pretty sure we couldn’t have children, though we hadn’t had it officially confirmed. Well, you can imagine our surprise when in January of 1981, we discovered that my “flu” was really pregnancy! After we got over the shock, we decided that we were pleased, though the future, especially my degree, seemed uncertain.

The baby was due in August, and we decided to proceed with my second year of graduate school. I had heard of La Leche League, but I didn’t think I could call them until after the baby was born. Many problems would have been avoided had I known otherwise.

In August, 10 days before the next semester and six days after our last childbirth class, Maggie entered the world. I didn’t know that I should insist on nursing right after birth, so it was 10 hours before the hospital brought her to me. Maggie took to it quite well, though she slept a lot during the three days we were in the hospital. The first night home I couldn’t understand why she needed to nurse so much. The next morning, with John’s encouragement, I called one of the LLL numbers we had been given in our childbirth class. I couldn’t go to any of the meetings, but the wonderful hours I spent on the phone with Jane (the LLL Leader) pulled Maggie and me through the rough, confusing times.

Maggie was the hit of the music department. John worked out his schedule so that he worked 40 hours in three-and-a-half days, mostly on the weekends, so he could be available to watch Maggie. But most of the time, Maggie went with me. She nursed in class, in a quiet corner of the library, in the student union. The only thing I couldn’t do was nurse her while practicing or taking a lesson, but John was there then.

During the second semester of that final year, Maggie got to the point where she didn’t want to stay with John while I rushed out for a night class, yet she was too active for me to take to class. After a few distressing days of John trying to comfort her and me worrying about her all through class, we arrived at a solution. I spoke to my professor, and Maggie, John, and I all went to school together those two evenings each week. John would take her out in the hall if she got too disruptive, but just knowing I was available kept her content much of the time. John loved the lectures, and it gave us more to share during a time when we often felt like ships passing in the night.

At my graduate recital, Maggie stayed up and later entertained guests at the reception. At my orals, she and John were nervously waiting in the student union for me to finish. She helped write papers, she came to rehearsals, and she loved the few concerts that we managed to get in. In May, she was featured in many of my graduation pictures. Yes, I made it – we made it.

So much has happened since then in which nursing has been a blessing. For example, we have had two major moves in which nursing kept everyone sane. Maggie’s second birthday is almost here, and we’re still a nursing couple. She is also very close to her father, and I think much of it is due to all the time they had together the first nine months of her life. Thank you, La Leche League, for helping me care for my daughter in some unusual situations.

← Erin’s Story: My NICU Experience And Breastfeeding Challenges
Encouragement Through the Struggles: Part 1 →