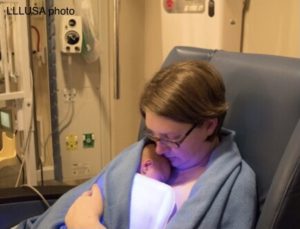 None of the books prepare you for having a baby in the Neonatal Intensive Care Unit (NICU). My first baby was born by emergency cesarean after a failed induction due to placental failure at 38 weeks. She had stopped growing in utero.

The NICU team was present in the operating room and checked her over, and she seemed okay. She was very small but breathing well and didn’t have any emergent needs. I had her on my chest before we left the operating room. We moved to recovery, where we started skin–to–skin contact and nursing. She was so tiny – 5 lbs 2.5 oz, 17 inches long.

Despite skin–to–skin contact, with warm blankets over us, she was having a hard time maintaining her body temperature. Then her blood sugar dropped dangerously low. We tried expressing colostrum for her and gave her sugar water, but it just wasn’t enough. The NICU admitting physician came down and told me that she needed to take my baby to the NICU. I held my baby closer and told the physician no. She emphasized that her blood sugar was dangerously low, and she was at risk of seizures and brain damage. I had no choice but to send her to the NICU.

The hospital pump was already in my room by the time I got there. A nurse came in – not a lactation consultant because it was late on a Friday night – and set me up with the pump since I was separated from my baby. If I had known then what I know now, I would have been hand expressing colostrum instead of trying to use a pump, but I didn’t know. And this certainly wasn’t in the plan, so I was not in any way prepared. But still I pumped, every couple of hours, extracting milliliters of colostrum for my tiny baby.

Around 2 a.m., I was finally released to leave my bed, and I made them bring me a wheelchair so my partner could take me to the NICU to see our baby. Tristan was under bili lights and had a glucose IV. The NICU nurse gave me information on how to label my breastmilk. She told us all of the NICU rules and was surprisingly accommodating considering it was the middle of the night. I wasn’t able to stay long because I was in a lot of pain and needed some sleep, but we promised to be back the next morning.

The next day we met with the lactation consultant. I told her I was concerned about not being able to breastfeed, and her advice was to concentrate on getting Tristan home and worry about latching later. She gave me a pumping schedule and chart to keep track of ounces pumped. She did not look to see that I was using the right size of pump flanges (spoiler alert, I was not). She did not suggest that perhaps hand expression would be more effective and less painful than pumping colostrum. Overall, she was not particularly helpful.

Every morning we were in the NICU we met with the medical team. We all sat down together and outlined the plan and the goals for going home. The first thing I requested was donor milk while waiting for mine to come in. Thankfully, they had some available and agreed with our request. On the third day we were there, I asked for a bili blanket so I could hold her and keep her under the lights. I knew how important it was to have my baby skin-to-skin, for both of us.

I spent the next three days sitting in the NICU, alternating between pumping and holding Tristan. The nurses from the mother/baby unit came up and took my vitals and brought my pain medication to the NICU. Those few days were a blur.

I was discharged as a patient at 11 p.m. on a Monday night. There wasn’t a way to stay at the hospital with our baby, so we went home. We were lucky to live less than 10 minutes away, so we went home, got a little sleep, and arrived back at the hospital first thing in the morning.Tristan got stronger over the next few days. Her bilirubin dropped and her blood sugar stabilized. By Wednesday afternoon, we were able to move to a transition room. It was basically a room where the parents stay and do most of the caregiving, while the NICU team is still checking in. Tristan no longer had the IV and was taking my milk by bottle. 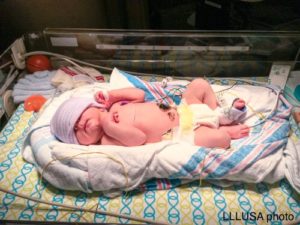 The transition room is where we met with the second hospital lactation consultant. She did a weighed feed and informed us that Tristan wasn’t transferring any milk at all and we needed to continue with the pumping and bottle feeding. Her answer was along the lines of: “She’s still very small and we’ll figure out latching in a week or two. Come back by the lactation center next week.” I was devastated. I was not producing enough milk with the pump. I was in pain. I was exhausted. And I felt like a failure. But I kept on.

We finally went home on Friday, a week after Tristan was born. I continued pumping and bottle feeding and started giving small amounts of formula as well because I could not keep my supply up. At my two-week appointment, the doctor came in and asked how I was doing and I fell apart. I cried about breastfeeding and pumping and failing. She called her office IBCLC to come into my room and our whole world changed.

The IBCLC hugged me first. Then she went to work. She determined, first, that Tristan had what appeared to her to be a significant tongue–tie and lip–tie. Then she did a physical exam and determined that I had been using the wrong size of flanges for the pump, which was probably not helping with production and was uncomfortable. Both problems could be fixed! I left there with a referral to the local pediatric dentist, new flanges in the right size, information about the local La Leche League meeting, and confidence that we could succeed.

Less than two weeks later, we had the oral ties revised by laser and Tristan latched effectively that day. We went for a weighed feed and she took in several ounces in just a few minutes. Just a few days later, I stopped giving bottles and never looked back.

Tristan is now five years old, small for her age, but perfectly healthy. After our difficult beginning, we went on to have a nursing relationship until she was 4.5 years old, two of those tandem nursing.