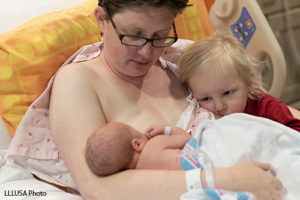 Doug was 16 months old and enjoyed a morning nursing once or twice a week when Chris was born. We came home from the hospital when Chris was 48 hours old. It had been about five days since Doug had nursed. He looked so big to me, but I knew he didn’t feel very grown up. When he woke up from his nap and found Chris nursing, he decided that he wanted to nurse, too. I let him try, and he snuggled in happily.

It was obvious to my husband and me that this was no passing fancy for Doug; it was very much a need. It seemed so important to him that our special nursing relationship would not be ended now that there was a “stranger” in the house. We talked it over and decided to play it by ear for a while and let Doug go along at his own pace. For the next few months, Doug continued to nurse frequently, and at times we wondered if this would last forever! But he was happy, and everything else was fine, so we waited.

By the time Chris was about eight months old, Doug was nursing about three times a day, usually with Chris. Both boys were getting pretty big now, and nursing them together was awkward and uncomfortable for me, so we decided to encourage Doug to nurse at times when his brother was not nursing. I would offer to nurse him (since I was initiating the change) a little before nap time and then read him a story when he was ready to rest. At night time, I would remind him after his bath that this was the time to nurse if he wanted to, and then his daddy helped out by reading him stories and lying down with him. This worked out very well.

It is hard to say when Doug weaned; it was somewhere around Chris’s first birthday. The months that my boys nursed together were a special time in their lives as well as in mine. Although it made demands upon me, it was a time of giving, and so there was much joy.