Looking Back: She’s an Expert 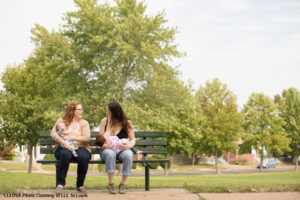 I’m sure that anyone who has ever nursed a baby has found herself at some time in an awkward situation where “discreet nursing” was called for. Having now nursed three babies, I am beginning to feel like an expert in awkward situations.

My “baptism by fire” into public nursing came when our daughter (now three) was tiny. We were attending the funeral of a gentleman who had been a member of the Knights of Columbus, an organization whose costume includes plumed hats, epaulets, and swords. When Jeri began to get fussy, I discreetly retired to the foyer of the funeral parlor to nurse her, as I thought, in quiet. Suddenly a parade of Knights in full panoply filed out of the chapel to gather in a circle around me! After that, I figured I could nurse under any conditions.

By comparison, the rest of Jeri’s nursing life was fairly quiet. She was nursed at wedding receptions, church services, in the University of California Physics Department, on an excursion boat, and in the back room of a photo shop surrounded by camera equipment (a shopping trip had taken longer than expected.)

Ned, our second child, led a more sheltered nursing life. He, of course, was also nursed in church, in amusement parks, and on playgrounds. But, on the whole, there were no highlights in his nursing career.

Six-month-old Paul is our “star-spangled nurser.” He nursed through half of his baptismal ceremony. He has been nursed on just about every form of public conveyance—car, plane, train, helicopter, bus. He was fed in front of the Smithsonian Institution, in the Senate Wing of the Capitol Building, on the New York subway, in Central Park, at an ordination ceremony. At the moment man first landed on the moon, Paul was nursing—as he was when man left the moon. I could go on and on, but the baby is hungry…

Editor’s Note: How does a mother’s experience nursing in public more than 40 years ago compare with your experience today? New Beginnings would love to share your story or photo of a time you nursed in public. Please send stories or photos to Amy at [email protected].