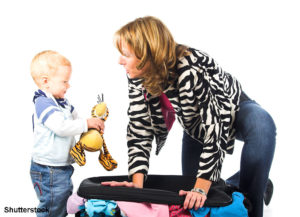 “In a couple months, my family, which includes three children ages 11, 7, and 3, is going on vacation to a large resort/amusement park. I’m a little worried about keeping our youngest child safe in a new environment, especially one so large and crowded with people. I’m also worried that my three-year-old will be completely over stimulated, have meltdowns throughout the trip and ruin the time for the rest of the family. Has anyone attempted a similar vacation with a child about the same age? What worked well for you?”

We went to a major theme park with six-year-old twins. We scheduled some days that were very low-key: one beach day and another hotel/swimming day. I think it was important for us adults to rest up, too! We made sure to have lots of snacks on hand. It was a great trip! – Kathryn Volkmann via Facebook

Look up rest areas in the park where you or your partner can take the three-year-old so that they can rest in between spurts of fun. Also make sure plenty of fluids and snacks are available and see if they have a young children’s area for him to play. A sling or stroller is useful when the child needs somewhere safe to be if they feel overwhelmed. – Virginia Howell via Facebook

We have gone to a major theme park every year since my daughter was 15-months-old (except when she was four), and she is now five. We brought a stroller as we usually do. When she was three, I also brought a wrap for waiting in lines or when she needed to be held. I wore the sling with my nine-month-old the whole time. – Aimee Bark via Facebook

Have healthy snacks. Take time to rest. Don’t try to cram it all in. You can always come back. Drink water. Give each child some individual attention; don’t make it all about the youngest’s needs. Share the parenting so you enjoy it, too. – Cathy R. Jones via Facebook

Lots of breaks and snacks. We brought a toy dog with us for my little one to focus on, to keep it from “running away.” If she got overwhelmed, I asked how her dog was doing. If it was behaving, I would tell her she is doing a good job to keep it safe, by not letting it run away or get lost. – Ashley Davis via Facebook

We went to two major theme parks with our children. They had so much fun that we didn’t leave until the parks closed. The key was keeping them fed, having plenty of snacks and drinks, and taking breaks for them to play with us instead of standing in the lines. – Tiffanie Krasner via Facebook

My children are now both adults: my younger one has autism. I was always concerned about losing track of one child, or my older one being unable to find me if I had to dash after the sibling. Everyone wore similar colored shirts. They didn’t even have to be bright, although I stayed away from very common colors such as gray or navy blue. It is surprising how easy it is to find someone else in a group who is wearing the same color. If your older ones take a ride or look at something while you “take five” with the younger one, make sure they and the adult with them know the exact meeting spot, such as “I will be at this bench by this fountain. If I have left to use the washroom or get a snack, I will be back.” Saves countless hours of wandering around looking for each other. – Christy McElroy via Facebook

Been there. Done that. Yes, meltdowns will happen. It’s important to remain calm with them during that time, as it is not completely their fault. Plan days with lots of rest time in between. We always went back to the hotel for a midday nap before venturing out again. A lot of amusement parks offer baby rooms that are air conditioned with comfy chairs, etc., to relax with small children. Also switch turns who rides with your child. Most parks offer a pass for the parent who stays behind to switch off, allowing the person who waited with the child to bypass the line.
Also, temporary tattoos with your phone number are great! – Emily Anne via Facebook

Try to stay as close to your normal schedule as possible for waking, eating, and napping. – Michele Nell via Facebook 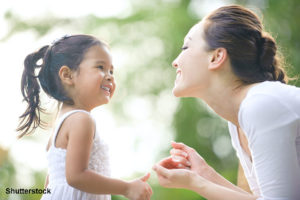 Keep some items that remind the child of home that they can use to calm down. You can start now when they get over stimulated and help them learn to pay attention to their breathing. Breathe slowly and deeply with them until they calm down. Wear them as much as possible. This will keep your child safe and help them stay calm because they are touching you while you wear them. If this child still takes a nap, plan your day outings around the nap if possible. If your child won’t nap in a new environment, do the best you can and use stroller/wear them or whatever works. Give your three-year-old choices as much as possible. Try to say “yes” as much as possible even if that means you phrase the “no” as a yes somehow. This can help with children who get over stimulated and provide a way for them to feel more in control. – Shauna Snyder via Facebook

When our children were about seven and two, we went to a popular major theme park. To avoid lines, we went first thing in the morning. After lunch we returned to our motel so the youngest could take a nap. My husband took the seven-year-old swimming in the motel pool during that time. Then late in the afternoon, we returned to the theme park for dinner and evening fun. The highlight was the evening parade after which we returned to the motel and went to bed. This worked for the three days we were there. I recommend it! – Barbara Ruff Parker via Facebook

Take nap breaks. We stayed at hotels next to amusement parks. The baby and I would go back to the hotel to nap, swim, and nurse while my mother, husband, or aunt would continue with the older girls. Also, starting off the day early beats the crowds. They would ride the most popular rides, then all come back to the hotel for lunch, swim, and break between 11 a.m. and 1 p.m. Have fun! My girls are all grown, but we made good memories! – Maria Elena Hanley via Facebook

Last summer, we took a vacation with our five children, ages 10, 7, 5, almost 2, and nine months at the time. Prior planning really helped us have an easier time! Think through the most sensible way to navigate the park, and look at the map for bathrooms and places to rest and eat. Prioritize which things you really want to see or do, and let the rest go.

Flotation devices in the pool are a must! Provide healthy snacks with protein, plenty of water and drinks, and schedule rest/nap times (a baby carrier and/or stroller—with favorite lovey toy/blankey—would work nicely for naps on the go.)

Don’t overestimate what you think you can do. Toddlers can’t process too much at once, and they may become overloaded and have a meltdown. Try a couple of big events a day. A couple of rides an hour is plenty with breaks in between.

A three year old likes to feel in control, so offer choices: this ride or that one, snack first or after, which prize if daddy wins the ring toss, etc.

Get the older kids involved with the care of a little one. Have the 11-year-old take him to the bathroom or wait while you do! That way no one gets totally overwhelmed with toddler care, and the three-year-old feels special having everyone’s attention at different times. Most of all, just relax and laugh as much as possible! Have fun! – Adrianne Sylvester via Facebook

Since my daughter was nine months old, I have attended a small weekly playgroup with five other parents and six other children. My daughter is now 18-months-old. By now the other parents and I are all good friends, and I really look forward to this social time. Recently, though, my daughter has started physically acting out. Last week she pushed one of the other children down. Just today she roughly grabbed a little boy by the arm to move him away from a toy she wanted. I’m afraid it’s going to escalate into hitting or biting. I don’t want to stop attending this playgroup, but I also don’t want to put other children in harm’s way or have my daughter become the bully of the group. What would you do?

← Looking Back: She’s an Expert
Helping to Get Breastfeeding Off to a Good Start: Milk Supply →