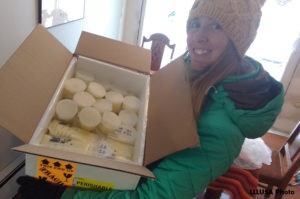 Originally published in the Fall 2017 issue of Northern LLLights, the Area Leader’s Letter for La Leche League of Minnesota and the Dakotas.

When Otto was small, my friend and fellow Leader asked me, “Is it true what they say? With your first you need help, with your second you can do it on your own, and with your third you help others?”

In some ways there was truth to the phrase, because with my third child I decided to become a milk donor.

There were a number of reasons I decided to donate milk. First, my doula, well connected to pregnant and nursing families in the community, reminded me when I complained of my overly full breasts in the early days that she would be happy to take any extra milk to give to babies in need.

Then, on a birth and breastfeeding blog I’ve followed since before my first child was born, I read the experience of Rixa Freeze donating milk during her nursing relationship with her fourth and last child. She wrote: “Every night I hook myself up to the pump, settle back into the couch, and pump a cup of liquid gold for my donor family. Sometimes I would be so tired when it came time to pump. I just want to go to bed…maybe I’ll do it in the morning…but still every night I would sit down, plug in, and pump.” I was inspired to see this busy mother make the commitment to donate.

Another factor was the questions about pumping milk (and occasionally how to donate milk) that came up in our Grand Forks, North Dakota, LLL Group. I thought that going through the experience of pumping regularly and donating the milk would be helpful as I told other parents what to expect. So I made up my mind to become a milk donor.

While my doula’s offer to help families in the community with my milk was appealing, I knew it could become awkward to do so in a small town where nursing parents know me as a La Leche League Leader. I decided that for my personal situation, donating to a milk bank would be the best option.

There were two facets to my milk donation journey: the red tape side of things and the milk-making side of things. On the milk-making side, I committed to pumping once a day. I started before Otto was six weeks old, when I knew my supply would be the most flexible, so that I could add an extra “feeding” for a donor baby. I had originally hoped to model blogger-donor Rixa by pumping every night before bed. When I tried this routine, however, I found it didn’t work well for me. I would nurse Otto to sleep, but inevitably before I could express the donor milk for the day, he would wake up and I’d have to nurse him back to sleep again, sometimes more than once. I found I was staying up too late waiting for my golden pumping opportunity.

Eventually, I switched to pumping during the afternoons, which worked better for me. After several months I stopped worrying that the pumping happen at the same time each day, and I just made it my goal to make it happen once a day. As Otto grew older and went through phases of being less interested in nursing during the day, I found it could be helpful to have that milk spoken for each day!

On the bureaucratic side of the operation, I had some forms to fill out and other legwork to do. These types of tasks are never fun, but the milk bank I worked with guided me in exactly what to do. I got notes from my doctor and from Otto’s doctor agreeing that there were no medical reasons we could not donate milk. Then there was blood work to be done to demonstrate my health as a milk donor. I also endured the minor hassle of health insurance paperwork to get a double electric breast pump at minimal personal cost. 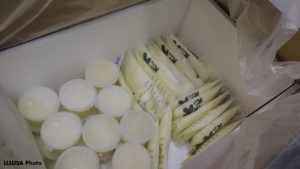 Once I was an officially recognized milk donor, I received milk donation containers from the milk bank that I used to freeze and store my expressed milk, but milk I had previously been pumping and saving was also welcome in my donation box. My donation had to be mailed since the nearest milk bank was several hours away. After a couple of months of saving up milk donations, I requested the mailing box, and it was delivered to my house with all of the appropriate stickers already in place for making my donation.

Mailing the box back proved rather tricky, however. I had to procure dry ice to keep the milk frozen, which I could only find at one business in Grand Forks, and it wasn’t in stock every day. Since I could only mail the box on certain days of the week, depending on the milk bank’s schedule, at times I felt I was chasing my tail trying to coordinate dry ice and shipment receiving. Once I had arranged a ship date, packed my milk, and obtained the dry ice, I headed to FedEx to ship the box. Yet one more hiccup came when I was told hazardous materials, like dry ice, had to be taken to the out-of-town FedEx drop point. While this was frustrating the first time I had a box to ship, the experience made future shipments more straightforward.

Milk donation itself wasn’t difficult, but it was inconvenient at times. When I traveled, I had to bring my pump along. If the logistics were too difficult to properly wash my pumping supplies and store the expressed milk, I would occasionally adopt a long-term benefit mindset: Move the milk now, even if this milk doesn’t make it to a donor family, in order to keep making milk for donation. I would encourage anyone considering pumping to adopt that mindset on occasion.

I had hoped to donate until Otto was a year old or beyond; however, in the stress of an out-of-state move and selling our house, I dropped pumping from my to-do list when he was about 10 months old. I know I am not near the top of the list for most prolific donors, but I am still glad I took the opportunity to donate breast milk to babies in need.

← Allergies and the Breastfed Baby: Report from University of Nebraska Breastfeeding Conference
Did You Ask Your Mother? →