“She Just Whipped It Out!” – A Difference In Parenting Perspectives 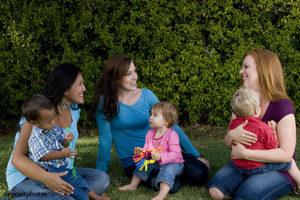 No matter the choices you make as a parent, you’ve probably heard – either face-to-face or second hand – that someone is critical of a choice you’ve made. It might be about feeding, sleep arrangements, caregivers, if your baby is properly clothed – whatever you decide, someone else will probably disagree.

Michelle N. shared an experience she had while nursing her toddler in a semi-public setting, and couldn’t help but see the humor in the difference of perspective between herself and a fellow parent.

“When my oldest daughter was around 18 months old, we moved to a new town. I knew one person before I arrived – someone I’d met through La Leche League circles who had a daughter close in age to mine. Right away, she invited me to join a playgroup consisting of about a dozen parents that met every couple weeks. I really enjoyed gathering with this group and, even though we had quite a range in our parenting styles, we all got along well.

“During one week’s playgroup, there were several new parents in attendance. We were all gathered together in the hosting parent’s living room, some sitting on chairs and other on the floor with their children nearby playing with toys. I happened to be sitting in a chair when my daughter indicated that she wanted to nurse. She had a quick nursing session without interrupting our conversations or any other activity.

“There were only two or three of us in the group who were nursing toddlers, and I only recall positive comments about breastfeeding up to that point. I really didn’t think anyone had even noticed my daughter’s nursing session because it was so quick and hadn’t disrupted the children’s play or the flow of conversation. When I was chatting with my friend a few days later, though, she mentioned that one of the new attendees couldn’t believe that someone had ‘whipped it out’ in front of everyone to nurse her toddler. My friend deduced that she was probably referring to me.

“I don’t think that parent ever returned to the playgroup – perhaps she was an out of town visitor that week – and to this day I can’t think about that comment without the song ‘Whip It’ by the New Wave band Devo popping into my head. It makes me see the humor in a remark that otherwise might have bothered me.

“While that brief nursing moment hardly registered with me at the time since it was just a regular part of parenting for me, it really stood out to that parent. Perhaps she hadn’t been around many other parents nursing their toddlers, or perhaps she wasn’t used to seeing nursing in (somewhat) public settings. Hopefully I helped expose (pun intended) her to a different way of parenting that, even if quite different from her own experience, helped her see what was possible so that the next time she sat near someone nursing a toddler, she wouldn’t think twice about it.”