Then and Now: Laurie and Derek’s Story 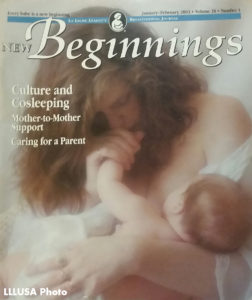 Editor’s Note: Laurie and her son appeared on the cover of New Beginnings in January/February 2001. We caught up with Laurie to learn more about her breastfeeding journey and to see where life has taken the two of them 18 years later.

Finding out I was pregnant was so exciting. I had an 11-year-old daughter and now a new baby. I knew I wanted to nurse him from the beginning. As I was doing research (I research everything) I decided to nurse a minimum of one year.  When I put my mind to something, nothing stops me. I was determined to accomplish this. How hard could it be? I was only 20 when I had my first child and I didn’t nurse her. She never cried. She was so easy, so this one will be easy too, right? I couldn’t have been more wrong. This little guy, from the very beginning, was a spirited, spunky child who knew what he wanted, and he was hungry allthe time.

The first few weeks were a blur. He wouldn’t sleep at all unless he was touching me. He nursed every hour! He nursed great from the beginning, but 15-20 hours a day. I had a little soreness but nothing horrible. I knew it would pass based on my research. Then wow! My milk came in and the amount of milk massive. He would choke with every let-down. I didn’t have to pump as I had so much leaking milk. I would fill two eight-ounce bottles a day.

At this point, I wanted to go back to work and I tried, but he wouldn’t take a bottle or a cup. He wouldn’t sleep unless he was touching someone. He cried all the time unless he was sleeping on me or nursing. He didn’t want to be held by other people; he would become overstimulated and not sleep for two days and nurse 20 out of 24 hours or just cry. I was exhausted. 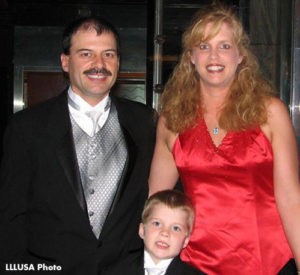 I sought out La Leche League around seven weeks postpartum. They helped me with suggestions on the over abundance of milk. They helped with the choking and with the constant spitting up after burping. They assured me that allowing him to sleep near me was okay. They gave me hope. By this time, I had postpartum depression from the lack of sleep, a baby who cried all the time and wouldn’t allow anyone but me to hold him. He was growing, getting very chubby, and when he wasn’t crying, he was very happy. So regardless of how poorly I felt, he was doing well.

The support I received from La Leche League helped me through the toughest times. I made some great friends with like-minded ideas. And as time went on, my son amazed me. At two months, he was rolling around; at five months, he spoke his first word and he was crawling. At 10 months, he was walking. By one year, he had a vocabulary of over 100 words and could sign almost as many and talked in three-word sentences. He loved his toy that he could sit down on and spin around on, but he never sat. He would stand and go hand over hand as fast as he could for one or two minutes, fall off dizzy, and do it again. I quickly figured out I was in trouble.

One year came and went. He wouldn’t take solids until he was one, so he almost exclusively nursed until this point. I decided at one year old that I wanted to nurse until he was at least two, and I wanted him to self-wean. Well, a two-year-old verbal child nursing is interesting. One time I took him out to eat with his Grammy Dottie. Our waitress had large breasts. Derek looked at me all excited and said, “Mommy, she got biiiiigggg Peekoos.” How we all laughed.

He nursed until he was almost three years old. I went to pick him up at a childcare he was just starting. He was very upset and had a very bad time. He asked for peekoos so I sat and nursed him. He calmed almost instantly, stopped, looked at me and said, “Mommy, they are all gone.” That was the last time he nursed. He is 19 and still remembers the last nursing session. Mission accomplished! 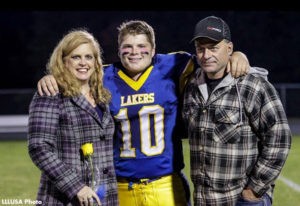 Derek never stopped moving. He was riding a two-wheel bike at two years old. He got his first snowmobile around seven and a dirt bike about the same time.  He started skiing at 10. He loved fishing with his father. He loved white water rafting at 14. This boy never stopped.

He played every sport in school. He got his first job at 14, and he bought his first snowmobile himself at 16. He worked so hard to pay it off in one summer. He has bought all but one vehicle that he has owned. He graduated with honors.

He now is a full-time employee at the company where his father also works. He welds next to him. He first welded when he was about five years old as his father taught him how to do it. He goes to college part time as well as works full time. He buys, sells, and fixes dirt bikes, boat motors, all terrain vehicles (ATVs), and anything with a small motor.

He amazes me. We have a very close relationship, and I believe that all I sacrificed the first few years gave him a great head start to where he is now. I am incredibly proud of this man, and sometimes I have a really hard time not seeing that sweet little boy who would honk my nose and laugh while nursing.

Category: Then and Now

← Weaning: “We Did It Together”
Gratitude →