What La Leche League Means to Me: An Interview with Longtime Leader Verna Gremaud

Editor’s Note: As we continue to celebrate the 60th anniversary of La Leche League, we thought our readers would enjoy a peek into the life of one woman who, as a young mother, started attending meetings in the early years of the organization, and has continued to be involved with LLL as a Leader over the decades. 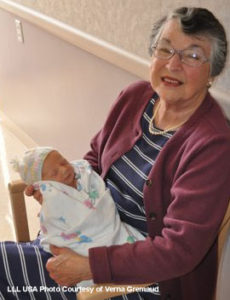 Verna Gremaud has been a La Leche League Leader since 1964 and has attended meetings since 1961. She is the mother of 13 children. Several of her daughters and one daughter-in-law have become Leaders.

How did you first hear about La Leche League?

It was October of 1960. In the Martha Carr column in the Post Dispatch, there appeared a letter that offered help with breastfeeding and listed a telephone number. So I called that number. I was expecting our sixth child, and I had done dreadfully poorly nursing the last two girls. So I called the number and I was kind of rude to the woman, and I said, “What can you do for me?” She asked me about how breastfeeding had gone and I said, “Well, I nursed my first child about eight months. But I would like to nurse a child until they weaned.” And she said, “Well, there’s no reason why you can’t. No reason.” Then she offered the manual for two dollars. It was notebook-sized sheets of breastfeeding information with no cover on it. Well, my neighbor was expecting her fourth child, and I told her they wanted two dollars for this manual. So she said, “Well, I’ll chip in a dollar.” She went on to nurse her baby just as long as she wanted, which was until three months when she put the baby on regular milk from the refrigerator. And some years later, I gave her another dollar and the manual was all mine.

I began getting postcards about the meetings after that contact. The first meeting had been held, I think, in February of 1960. Every month I would get a card about the meeting, but Bob was working second shift and I couldn’t leave five children. But on the day of the February meeting, my brother-in-law happened to stop by, and I said, “Oh, would you stay with the children while I go to this meeting?” He stayed with the children, and I called a friend who had a new baby and was interested. Her husband drove us to the meeting in Bridgeton. There were five of us at the meeting, but the Leader never came because she’d had to go to the hospital with her own baby.

Jamie was born the first part of March, and a leader, Pat Rudolph, called me and talked to me about nursing him. I really did know how to nurse; I just always had this concern about family responsibilities, and getting enough rest, and taking care of everything else, and giving the baby the time they needed. Really, I just needed my thinking straightened out. Finally, when Jamie was two months old, I went to a meeting in South City. There were two full rooms of people at that first meeting I attended. It was amazing.

How did you become a Leader?

When Jamie was about 16 months old and I was nursing him, I was asked to lead meetings. There wasn’t any sort of Leader training at that time. That would have been 1962. Later, I think in 1964, Chicago started getting involved with approving Leaders, so we all had to answer a questionnaire—twenty-two questions about breastfeeding. Some of us did better than others: some of the girls had to redo some and be questioned, but the woman wrote back to me saying that I was just fine and dandy to go ahead. 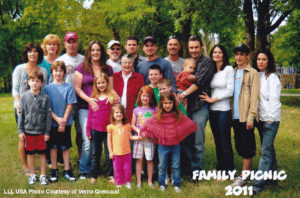 We had League meetings for more than 30 years in different homes and churches. We had this planning board: every month or two we’d get together at someone’s house, and we’d stay until one o’clock in the morning. We just had so much to talk about and so much to discuss and so much to organize. We stuck very close to the series of four meetings: the benefits to mother and baby of breastfeeding, getting started, childbirth, and then weaning and solids. So every time we started a new series, we would meet. There would be at least four of us, and we would each take a different part of the meeting: the introduction, the body of the meeting, somebody would watch the children, and someone would see about the refreshments. Even at that time there were some working mothers, but they all seemed to manage quite well. We had a big old breast pump that was so heavy you could hardly lift it, and we loaned it out if somebody needed it. And of course we had that little hand pump, the little bulb syringe thing. Goodness, those were the days.

What do you remember about those early days?

When I got up enough nerve to tell the pediatrician I chose not to feed solid food early, he jumped at me. “What do you think I write these papers out for?” he said. I never fed my baby any baby food. My babies—the older ones—never liked baby food anyway. But the doctors said at six weeks you’re supposed to start feeding them. We’d also get complaints about a pediatrician who, when women were attempting to nurse and doing reasonably well from what we could tell, would say, “I’ve seen breastfeeding babies die right before my eyes.”

We were rather pushy in the early years. And we had a few people who went where they weren’t supposed to be and said things they shouldn’t have said. But it sort of went with the territory. And you know what? I am so glad that I have stayed all this time to see everything we did in the beginning be vindicated and validated and practiced today because we were fighting an uphill battle. It was a tough mountain to climb. It has done my heart good to see everything we said in those early years be how it’s done today. It just took everyone else so long to get onto it.

There were also bright spots. When I had Diane, St. Mary’s hospital had a Sister Caritas. Sister Caritas really wanted breastfeeding to be pushed at St. Mary’s. And in those days you didn’t nurse your baby until your milk came in. They kept the baby in the nursery. It was terrible. You didn’t nurse until the baby was three days old, when your milk supposedly was there, so my older children didn’t get colostrum. So here comes Sister Caritas into my room with this entourage of student nurses after Diane, my fifth child, was born. She brings the baby from the nursery and says, “Nurse the baby.” “Oh,” I said, “Sister, my milk isn’t in yet.” “Oh, that’s okay,” she said. So I nursed the baby for the student nurses.

I finally had a natural birth with Kerry, who was the child after my La Leche League baby. I sat up to deliver him and that was really something. So after that I never had medication. I switched doctors to have natural birth because when I was going to broach it with my first doctor, I heard the woman in the next cubicle ask him about having a natural birth and he had a fit. “Oh no, you don’t want to do that.” So I didn’t even ask him.

I had my next several births with a different doctor, but then I was nursing one of the babies and I hadn’t had menses in about a year. The doctor said to me, “Oh really? Your uterus is going to atrophy.” He wanted me to stop nursing the baby so my menses would come, but I said, “No, no. I’m not going to do that.” So I switched again and found a doctor who was just lovely. He said he had nursed until he was three years old. So I had Susan, Rebecca, and Brian with him. And I had wonderful births. And they all nursed until they weaned themselves. After I came to La Leche League, my babies all nursed, but I never did tandem nurse. It seemed like they would always wean themselves late in the pregnancies.

I couldn’t wait to nurse my first child. So when I came home with the baby, I sat in the rocking chair to nurse, and there was a footstool.  Bob sat on the footstool, and he said, “I want to see this.” I remember sweet moments like that. 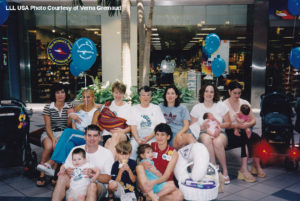 And of course, we adored the founding mothers. I went to ever so many conferences. The first conference, in Chicago, in the old Knickerbocker Hotel, there was a train full of us from St. Louis. We had all sorts of flea markets, rummage sales, whatever it took to raise money. And somehow we got enough that we were a whole trainload that went.

We got in at midnight, the air conditioning had gone out, it was sweaty and hot, and we were holding babies, so we were all kind of a wrinkled mess. We all came into the lobby of this hotel, and here were all these men. And they looked at us. I don’t know if women with babies ever came there. But it was something, that first conference. All the sessions were in this big auditorium. Kerry had just learned to walk and there was a big wide staircase that went up to a mezzanine around the top, and he loved to climb those stairs. So I spent my time going after him on the stairs.

What has kept you going all these years?

Having my children, seeing them breastfeed my grandchildren, and enjoying it and being able to be with them and support them in their breastfeeding, in their childbirth. I’m just a softie for my children, I guess. And I always think, I don’t think I was as good a mother as they are.

It’s been really something. I wouldn’t give it up for anything. It’s worth gold and dollars and diamonds and everything else, my association with La Leche League.

Can you tell me what La Leche League means to you?

When La Leche League came to my knowledge, I grasped it like a straw, like a dying person. It was like a lifeline to me. I was really in deep trouble with trying to get nursing worked out and there just wasn’t anybody to help. I wanted so much to breastfeed my babies. And League has done that for me, helped me do what was in my heart all along. Helped me care for my babies the way I wanted to. And it’s been a wonderful ride. To live and see my grandchildren, my great-grandchildren, and my great-great-grandchildren being breastfed is amazing. It truly is.