Editor’s Note: Part I of Shannon and Hunter’s story was published on the New Beginnings blog on July 23. You can find Part I here.

In the month preceding Hunter’s surgery, I decided it was best to express some milk to have on hand after surgery, in case he wanted milk but couldn’t or wouldn’t latch to my breast. Since Hunter was usually only breastfeeding three times a day and I had never pumped before, expressing milk was no easy feat for me. I rented a hospital grade pump and began pumping after all Hunter’s nursing sessions. I found hand expression with breast compressions more useful than the pump, and managed to produce about half an ounce per session, which didn’t seem like much, but they all added up to 60 ounces over the course of a month, which I was very satisfied with. Looking back, it wasn’t really worth the effort because he only drank 8 ounces of it, although the routine and schedule of pumping gave me something to focus my worry and nervous energy on. I felt that I was preparing for surgery in some way, by doing something I knew I could, which was to make milk.

Two days prior to the surgery, I had a battle with nurses regarding the latest time before surgery that Hunter would be allowed to breastfeed. I had done my own research and found the Academy of Breastfeeding Medicine’s “Recommendations for Pre-procedural Fasting for the Breastfed Infant”, which states that human milk can be safely ingested up to four hours before surgery. But a nurse phoned me to tell me that I had to stop breast milk six hours prior to surgery, which meant they were classifying breast milk in the same category as formula milk. She suggested that I offer pedialyte instead of breast milk. I argued with her but she would not back down. I quickly emailed a nurse in the anesthesiology clinic where Hunter and I had been for a pre-operative appointment a few weeks earlier, quoting the ABM’s four-hour guideline. The next day she responded that I was correct and told me Hunter could breastfeed up until four hours prior to surgery. This was a huge relief for me, to know we would have some sleepy early morning milk, which would make Hunter less grouchy about having to fast until 9 a.m.

I woke early on the morning of Hunter’s surgery. I quietly slipped into his room, picked up his warm body and latched him. He didn’t take much milk and was quickly back to dozy comfort nursing. I watched the clock and didn’t unlatch him until 4:59 a.m., enjoying every last suckle but being able to confidently say he had stopped feeding by 5 a.m.

Handing Hunter over to his surgeons was the most difficult thing I ever had to do. Once the surgery was in progress, my husband and I tried to keep busy. I quickly found a mothers’ room at the hospital to express milk, which was a useful distraction. In the afternoon, I had just begun setting up the pump for a second time when the pager we had been issued by the hospital went off: Hunter’s surgery had finished in under four hours, well ahead of the five to six hours we had been told to expect. The surgery had gone wonderfully and we were told we would be able to see him in the Intensive Care Unit shortly.

He was still groggy but immediately responded to seeing us. Within minutes, Hunter was asking for water. He guzzled down four ounces of water and thankfully showed no signs of nausea. He drifted off for a nap and upon waking began to feverishly use sign language asking for milk. The nurse and my husband gingerly moved Hunter to my arms, being careful of all of his tubes and a drain he had coming out of his scalp. Once together, he immediately latched and we both felt at home again. I studied his beautiful new head while trying to get adjusted to how different he looked. Hunter didn’t take much milk before drifting back off to sleep while soothing himself at my breast.

And that is how we spent the next three days. Hunter needed the comfort of breastfeeding almost around the clock and I was happy to give it to him. He refused to sleep in the hospital crib, so my husband and I spent nights sleeping with him lying upright (which helped with the swelling) against one of our chests. I would take him for the first six hours and then we would switch so that I could lie down and sleep for a bit. I don’t think I have ever been more exhausted in my life! My nipples were sore and dry from the constant comfort nursing of a toddler, but I was content to know that I was able to provide the ultimate source of comfort for Hunter during the most painful days of his life.

About 30 hours after surgery, Hunter’s eyes swelled completely shut, which we had been told to expect. When he awoke from a nap to discover this, he immediately became disoriented and very upset. Breastfeeding helped him to feel safe when he couldn’t see. Thankfully, his eyes were back open about 36 hours later.

The hospital staff was incredibly supportive of us breastfeeding. They were thrilled at the number of wet diapers he was producing, and were happy that he was obtaining nutrition from me, since he had little interest in solid food. Hunter remained latched to my breast during the removal of IVs and the drain from his scalp, with barely a flinch.

We spent three days in the hospital, Hunter being discharged after his eyes opened back up. He had a follow-up appointment with his surgeons just over three weeks after the surgery, and they were very pleased with how well he was healing. Days later, we made our way “home” to Guangzhou. 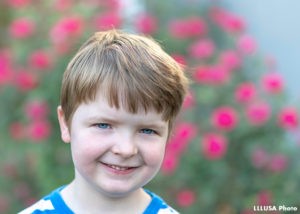 Hunter continues to amaze me every day with his strength and resiliency. As his hair grows back over his incision, which we call his lightning bolt, all the remnants of the trauma he has been through have begun to fade. With virtually no chance of him needing any future surgeries, Hunter’s future is bright. He is an active toddler and his interest in breastfeeding is waning but, for now, it will get us through the bumps, bruises, and tantrums of toddlerhood, just like it saw us through the most difficult days of our lives.

Update: Hunter and I continued our nursing relationship until he was two and a half years old. He chose to wean not long after I became pregnant with his brother and my supply dwindled. It has been almost four years since Hunter’s surgery and he continues to thrive. He is an active five year old with no limitations. Thanks to our time in China, he is fluent in Mandarin and amazes us every day with his ability to think and speak in two languages.

← Easing the Distress of Major Surgery: Part I
Celebrate Breastfeeding In August With LLL USA and Live, Love, Latch! →