Easing the Distress of Major Surgery: Part I 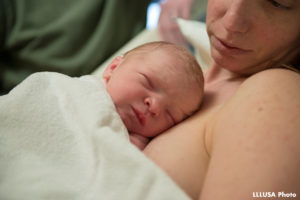 Last July, my husband and I were dreading the 7,000-mile flight with our 17-month-old son from Hong Kong to Seattle. It wasn’t the flight itself we were dreading (although flying with an active toddler is never a treat), it was what lay ahead of us once we arrived in the U.S. Just a few weeks earlier, Hunter had been diagnosed with a rare condition called craniosynostosis, and he was facing scary and invasive cranial surgery to correct it.

The first few months of Hunter’s life were far from easy. He was born in Hong Kong after a long but glorious drug-free labor. He latched almost immediately after he was placed on my chest, and it seemed that our breastfeeding relationship was off to a wonderful start. However, over the first few months of his life we battled reflux, colic, poor sleep, around-the-clock breastfeeding, clogged ducts and mastitis. I knew something was not right, and my own research helped me to identify a severe posterior tongue-tie. Once that was corrected, our breastfeeding relationship quickly improved.

Everything was great for several months. Hunter continued to have a large head (above the 99thpercentile), but we never gave that much thought because he was also consistently above the 95thpercentile for height and weight. Furthermore, none of the physicians who Hunter saw for well baby visits ever mentioned anything about his large and long (rather than round) head.

Then, at Hunter’s 15-month checkup, the practitioner (almost just in passing) noted his prominent forehead and that there was a raised ridge running vertically down the middle of his skull. He commented that Hunter “might just have a big head” and suggested that we should simply keep an eye on it and follow up in a few years with a neurosurgeon.

These observations were unsettling and we were not content to wait for a few years. Once home, I began searching the Internet for clues. My Google searches consistently returned results for one condition over and over: sagittal craniosynostosis. Looking at images of children with the condition made my heart sink. I immediately made contact with a specialist educational and awareness organization, and their representative quickly confirmed from photos that Hunter looked like “a typical sagittal synostosis child.”

As the tears filled my eyes, I picked Hunter up and began to nurse him. It was my happy place, and in that moment of uncertainty it was the only thing that felt right. Oblivious to anything being wrong, Hunter happily nursed as I apologized profusely for not knowing sooner. I remember kissing away my salty tears that had fallen on his perfectly imperfect head and stroking the raised ridge that lay hidden under his beautiful and soft red hair.

Craniosynostosis is a birth defect that occurs in one in 2,000 live births. In a nutshell, it means the premature fusion of one or more of the fibrous sutures of an infant’s skull. In Hunter’s case, the sagittal suture, which runs down the middle of the skull from the back fontanelle to the front, had fused too early, most likely in utero. This had caused his head to grow long and narrow and his forehead to protrude. It is a progressive deformity and as the brain continues to grow, the abnormal skull shape becomes more pronounced, leading to increased intracranial pressure, which can cause a myriad of neurological issues.

In the coming days, we made arrangements for Hunter to be seen at Seattle Children’s Hospital, at its world-renowned craniofacial unit. Once there, a physical examination and CT scan confirmed a diagnosis of sagittal synostosis. Thankfully, all of Hunter’s testing showed that his brain was not currently under any increased pressure, so the decision to proceed with corrective surgery immediately was at our discretion. But the severity of the conditions that might result if we did not proceed (such as blindness, hearing loss, migraines and seizures, and developmental and learning delays) meant that we never had any doubts about going ahead with the surgery as soon as possible. We were given a surgery date three months in the future. My husband had to return to work in China until nearer the surgery date, while Hunter and I stayed with family in Seattle.

Hunter would undergo a procedure called Cranial Vault Reconstruction (CVR). Basically, his skull plates would be removed, reshaped and then reaffixed using dissolvable plates and screws, resulting in a more normal head shape and ensuring his brain had plenty of room to continue to grow. Naturally, I had many concerns regarding this surgery. As a passionate breastfeeding mother, many of these concerns revolved around breastfeeding. When would I be able to breastfeed Hunter afterwards? Would the hospital allow it? Would he want to? How would I express milk during surgery and maintain supply afterwards if he didn’t want to breastfeed?

Editor’s Note: Shannon and Hunter’s story will continue in next week’s blog post, which will be published July 30.

← Looking Back: Solutions to Biting
Easing the Distress of Major Surgery: Part II →