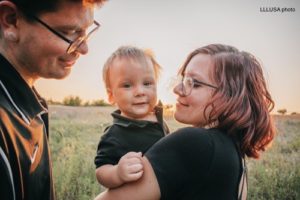 I found out about La Leche League on a Facebook group while I was in my third trimester. I had just graduated from high school. My main reason for going to my first La Leche League meeting was that they seemed to have the same parenting vibe that I have.

We have had a very interesting breastfeeding relationship from the beginning! My son was in the Neonatal Intensive Care Unit (NICU) for the first six days because he had fluid in his lungs and trouble breathing as a result. I was not “allowed” to breastfeed him until the last two days (of his stay). We then started using a nipple shield, which took nine weeks to wean him from. Then we discovered he had a narrow palate, and I had vasospasms. Then, at 10 weeks he was hospitalized with Respiratory Syncytial Virus (RSV) and almost had to be ventilated. During that event, I had to pump bottles instead of nurse him for part of the time. Things calmed down until seven months of age when the ear infections started. He ended up with ear tubes at 11 months after three ear infections and three double ear infections. All of this happened while I had a pretty severe oversupply for 13 months.

I just took everything one day at a time. I would panic then realize (with my husband’s help) that I couldn’t focus on the future if I couldn’t get through today. My support system is really good. Both sides of the family support me with breastfeeding, and all of my friends from school are impressed with me breastfeeding for two-plus years. I’ve educated some of them about natural term, breastfeeding basics, and am always available for any questions.

I am rarely taken seriously as a young parent. I get comments like, “Oh, you’re so young. Just wait until you’re older. You’ll regret doing xyz for your kids.” Or I’ll hear, “You’re just young. You don’t know what’s best. You should do xyz.” I have lost some friends. It seems strange, but apparently bringing a baby with you to someone’s house when they ask you to hang out is weird if you’re a mother at 18 years old. If you invite me, my child is coming. (He was three months old.)

La Leche League has the best Facebook groups, and the meetings are even better. I have never felt judged about being young. In fact, many of the other parents were impressed that I came, being as young as I am. Almost everyone is about a decade older than me in the Group I started attending, but they all treat me like an equal. To anyone who is on the fence about attending, I think you should “go for a swim.” I say that because my first “meeting” was just hanging out at the pool with the La Leche League Group. It was so relaxed and fun!

There are times now when I wish I could wean because of nursing aversion or the constant wiggles of a toddler, but in the end, I’m committed to natural weaning when he is ready. I’m an adult and can deal with a little discomfort and annoyance, but he’s a toddler and is still learning.