Looking Back: Solutions to Biting

Originally published in the September-October 1985 issue of New Beginnings 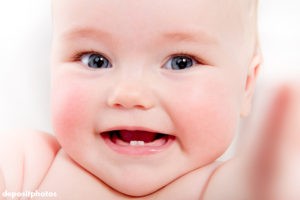 I often hear those who are nursing babies during the second half of their first year express dismay about biting and would like to offer the following suggestion. Like all teething babies, my ten-month-old son, Perry, has at times felt the urge to bite down when his gums became tingly during nursing. Perry was most likely to bite when he was very close to sleep after nursing for several minutes. At first I tried the commonly used method of saying “no” sternly when he bit, but I found that I ended up with a crying baby who was no longer drifting peacefully into sleep. Then I came up with a new idea. When I felt his jaws begin to clamp down, I very quietly said his name. The biting stopped as he paused to listen. When he didn’t hear his name repeated, he resumed nursing without biting.

During this biting phase, I always carefully and gently removed my breast from Perry’s mouth as soon as he was asleep to avoid further accidental biting. I have found that saying the baby’s name instead of “no” is also effective with a wide-awake biting baby. Somehow his own name holds special interest for him.

Another suggestion for discouraging biting is, instead of pulling away, to pull baby closer. Most mothers find that when baby is pulled close he immediately releases the breast. Consistently pulling baby in very close each time he tries to bite usually discourages him quickly.

Editor’s Note: Teething and breastfeeding can be an uncomfortable time for both nursing child and parent. Additional information is available at www.llli.org/breastfeeding-info/teething/.

← Gratitude
Easing the Distress of Major Surgery: Part I →