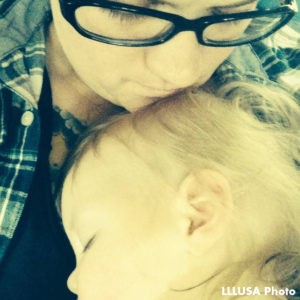 Somewhere near the beginning of my twenties, I began to identify as genderqueer. Now that I’m older, I sometimes refer to myself as non-binary because it sounds softer; worn in like a favorite t-shirt.

If I had the mythical opportunity for three wishes granted, I’d try to be as selfless as possible for the first two and then I’d wish away my breasts. Poof, be gone! Having breasts has been a psychological struggle as well as a physical one. The fact that they tripled in size during pregnancy felt like a karmic slap. As far as the majority is concerned: Boobs Equal Female. Mine spilled upwards and sideways, draped over my beach ball belly, refusing containment and obvious to all. The “F” box was always checked for me, regardless of my feelings on the subject.

My breasts kept me from being me.

But then the baby was born. And then my milk came in. Suddenly my breasts were no longer Breasts. They became Nursies. And Nursies became the center of everything. There was too much to figure out. We dealt with a tongue-tie, then a lip-tie, then a pretty impressive over supply. For the first four months, I pumped because Kiddo could not latch. Not even a little. Our freezer filled with milk bags faster than he could bottle feed. So we milk shared. (*See note and link below regarding milk sharing.) Milk sharing turned out to be an unexpected source of oxytocin for me, which created an even more aggressive milk production. My body was bellowing “feed all the babies!” I felt like some sort of primal milk deity.

At some point during the fifth month, Kiddo figured out how to latch. Nursies quickly became his favorite thing and I spent most waking hours nursing, drinking gallons of water, and watching Netflix. I googled side-lying nursing and once we figured that out, well, nursing was All There Was. Sleep or wake, inside or outdoors, in the middle of Home Depot, often in the shower. If there wasn’t a nipple in that baby’s mouth the whole city knew it. 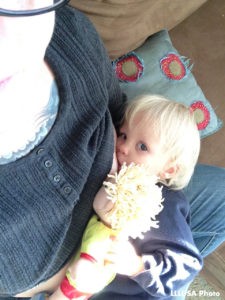 Kiddo is three-and-a-half now. He calls my breasts Nursies. As in “Oooo! Look at your Nursies! Can I nurse? Can I have Nursies?” Once I asked him when he would be ready to give up nursies for good and he quickly answered, “when I’m six.”

A good friend of mine once asked me if breastfeeding created any dysphoria about my body or gender. I told him that it actually helped, because now they have purpose. They kept my baby alive and thriving. Now they save the day when he’s scared or injured or sick or about to have a meltdown on the metro. For me, personally, my breasts have everything to do with who I am as a parent and nothing to do with my gender. I expect the memory of nursing will forever be a part of how I define love. And for that I am grateful.

*La Leche League USA encourages anyone participating in informal milk sharing to be fully informed of both the risks and benefits. You can read more about both at www.laleche.org.uk/sharing-breastmilk/.

← I’m Failing At This!
Breastfeeding as a Survivor of Childhood Sexual Abuse →