Stephanie’s Story: “Breastfeeding Is A Part Of My Identity”

I have fond memories of my childhood: from riding my bike outside for hours and playing house to making mud cakes with “chocolate” frosting in my backyard and stuffing my bra. Once, while pretending to breastfeed my baby doll, my mother walked into my room. I immediately hid what I was doing and my mother was none the wiser. I still remember how scared and ashamed I felt, thinking that I would be in trouble if my mother somehow caught on to what I was doing, for being “grown.” I grew up the oldest of four children in a Christian family. My mother did not breastfeed, and I didn’t grow up seeing people from my family or community breastfeed. I honestly don’t know where I even got the idea to breastfeed. I did continue to “breastfeed” my dolls, but in secret. It felt natural when I was playing house in my room and pretending to be someone’s mama.

At 22, I became pregnant with my first child. My pregnancy was turbulent; I felt alone and was violently ill for at least six to seven months. Although I didn’t have a plan yet, I had no doubt that I could breastfeed my child. After developing pre-eclampsia and being induced, I delivered my perfect 5.1-pound baby boy. My delivery was traumatizing and, although the experience hadn’t been what I had envisioned, when I finally was able to hold my slightly jaundiced baby and breastfeed him for the first time, I felt complete.

If I’m honest, I didn’t know what I was doing. I just knew that I was supposed to be breastfeeding him, and I followed my instincts. The nurse on duty encouraged me with positive language and supported me. She also mentioned a group for breastfeeding support called La Leche League.

During my extended hospital stay, my son’s father was worried that the baby wasn’t eating enough. He wanted to give him the formula that the hospital had provided in the baby cart. I declined and insisted that our son was doing fine. I also hid the formula for good measure. An argument ensued and the nurse came in to check on the commotion. He told the nurse that he wanted to feed the baby formula to be sure he was getting enough milk. I then told the nurse that I only wanted to give my baby breastmilk. The nurse had my back and said something to the effect of, “If Mom wants to give baby breastmilk only, then that’s what we will do.” I felt so supported in that moment. This medical professional was supporting my choice to breastfeed my baby. I needed her. Not only did she support my choice and treat me with kindness and respect, but she told me about La Leche League. Even though I never went to a meeting (at that time), that information stayed with me. 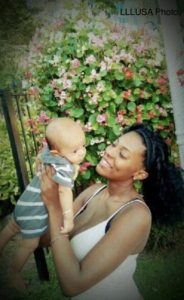 I breastfed my son for 18 months and had no problems. There were small incidents (that felt huge during the time), like when my son refused a bottle after I returned to school and he was with his father. I found a sippy cup with a rubber spout and problem solved. I also had an outspoken aunt who was very vocal about me breastfeeding in front of my family and out in public. She once suggested I take my son to the bathroom while we were at a restaurant and feed him there. I was surprised that me feeding him offended her because I had never gotten any pushback on my short shorts and bikini wearing prior to having a child. I pushed on and ignored the suggestions. I’m grateful that I had a relatively easy breastfeeding experience with my firstborn child. It was the verification that I needed to know I did the right thing. Breastfeeding helped me get through a bout of postpartum depression, and helped me find my purpose in life.

Since that time, I have gone on to move to a different state, have three more children, and get married. After moving and having another child, I remembered La Leche League and went to a meeting and Area Conference. I immediately felt at home and knew that I wanted to be a part of helping others breastfeed. I felt so welcomed by local La Leche League Leaders who supported me during the Leader application process. I became a Leader and eventually felt the internal tug to join the LLL USA Council. I have also started a nonprofit called Nourish & Thrive aimed at creating breastfeeding equity for Black women/birthing people.

I never expected to find my purpose in life through breastfeeding. It has been a long and rocky road, but I wouldn’t change a thing. Breastfeeding is a part of my identity and is not only normalized in my home, but amongst my family. Oh, and that same aunt who was so vocal that I should only breastfeed in private doesn’t bat an eye when I “whip out” my nipple to feed my children. When I asked her about it, she said “It’s just normal now” and shrugged.

← Black Breastfeeding Week 2022: Spotlight on Author and Lactation Consultant Nasheeda Pollard
Out of the Mouths of Nurslings →